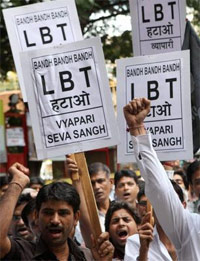 08 November, 2014
Print this article Font size -16+
Taxes and death, like they say are inevitable. Not that anybody will reconcile to the fact. In Maharashtra, a Local Body Tax imposed by the Municipal Corporation has everybody fuming. Shops have stayed closed in most of Mumbai after an indefinite strike was called last week, and with transporters set to join the strike, essentials like vegetables could become dear.

To be sure, LBT is not an additional charge. It merely replaces the much-hated Octroi, which was a tax you had to pay before entering the precincts of a municipality (The government argues that the shift to LBT will reduce the queues of trucks outside check-nakas). But as PwC’s Dharmesh Panchal says, the industry was demanding that Octroi be abolished, like in states like Punjab & Gujarat, since a similar tax on the value of goods is levied as Value Added Tax.

But what has traders livid is also the scope for abuse by municipal authorities. The new tax will be based on the value of sales at the retail level. The traders fear that this will lead to civic officials getting a free hand to inspect their account books, and subsequent harassment. Newspaper reports cite vada pav vendors being asked to produce receipts for their sales. Also, with the Municipal authorities having the right to levy the tax, traders fear the costs of additional compliance, since VAT will be levied by Sales Tax authorities.

The government on the other hand claims that octroi was prone to evasion, since the tax was based on the value importers claimed were being imported not on sales. But nevertheless, there seem to be genuine worries. ‘Multiple tax authorities means multiple issues’, says Panchal. What was required was a more streamlined system, he says, by which the tax payer will have a single point of tax-payment. Moreover, he argues, when we are moving closer to a Goods and Services regime, this seems to be a step backwards.
Tags assigned to this article:
exclusive to web news 7 tax authorities abraham c mathews tax payer lbt municipal authorities streamlined system octroi indefinite strike