Why Jagdish Bhagwati May End Up Enraging Sangh Parivar 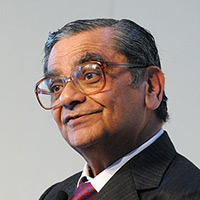 08 November, 2014
Print this article Font size -16+
Last week, globally renowned economist Jagdish Bhagwati claimed that he and his protégé Arvind Panagariya, might play key advisory roles in the next central government if Narendra Modi led National Democratic Alliance government comes to power.
Given the pro-globalisation position of Bhagwati, any thought of him being considered for a possible advisory role in the next government will enhance the image of Modi in the eyes of the Western world, particularly, the US and the European businesses.  Any international appreciation in the final leg of the general elections will certainly be a morale booster for Modi, who has been criticised for long by these very countries for his alleged role in abetting communal trouble.
However, Bhagwati’s hope to advise Modi as Prime Minister, if materialises, could dampen the spirit of the Sangh Parivar, the network organisations started by members of the Rashtriya Swayamsevak Sangh (RSS), which constitutes the major support base of Modi’s Bharatiya Janata Party (BJP).
Here is why.
When Bhagwati says that the next government should allow more foreign investment and trade to spur slow growth and curtail government spending, the economic wing of the Sangh Parivar Swadeshi Jagaran Manch (SJM) thinks exactly the opposite. “Any government that comes to power should focus on domestic savings, capital formation, manufacture and demand for growth as the core economic impulse and not foreign capital and foreign trade as means for growth”, states the SJM resolution adopted at its national conference in December 2013.
Read Also: Bhagwati Eyes Role In Modi Govt

Bhagwati wants the next government to position India as a trading power, seeking to enter, on its own terms, regional pacts such as the Trans-Pacific Partnership being negotiated between the United States and East Asian nations. At the same time, RSS, in a statement opposing free trade agreements called it “a matter of grave concern” that multi-lateral trade agreements and free trade agreements have been restricting the government in taking decision in all areas in national interest and leaving it without any option.
“In the given circumstances urgent initiative is needed for restructuring the economy for self reliant development”, it had warned.  Bharatiya Mazdoor Sangh (BMS), the labour union close to the BJP, is a severe critique of the multilateral trade agreements. “Our experience with the previous Free Trade Agreements like that one with ASEAN has to be assessed before we proceed with FTA with European Union. Most of the present Indo-EU FTA clauses are WTO-plus agreements. Hence the contents of the discussions have to be disclosed to the public before anything moved further”, C. K. Saji Narayanan, BMS president notes.
The top economist, a Columbia University professor, has also felt that the urgent policy requirement, to be taken up by the new government, is to slow government spending, which he blames for high inflation.SJM considers government’s role in ensuring better education and affordable public utility services to all Indians as fundamental responsibility, which it cannot escape from.
Though Bhagwati’s statement had no official backing from the BJP, the high stature of Bhagwati, considered as the most famous living economist never to win a Nobel Prize, gives credence to the claim.
Incidentally, Bhagwati’ policies are not far different from what the Congress government follows today. The only difference Modi can bring in if voted to power will be in its implementation. Gujarat model is not about an out of the box economic policy, it is about the level of implementation of certain policies, irrespective of the support those policies enjoy among the support base of BJP.
Both Bhagwati and Panagariya can be assured of that.
[email protected], [email protected],
[email protected]
Tags assigned to this article:
politics web exclusives joe c mathew othertop1 jagdish bhagwati 2014 elections rss sangh parivar