Why Is The Amway CEO Arrested Repeatedly? 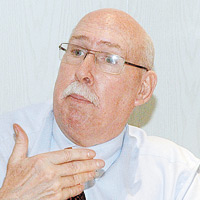 08 November, 2014
Print this article Font size -16+
William Pinckney, the CEO of Amway in India was arrested on Monday (26 May), the second time in less than a year on charges of “promoting illegal money circulation scheme, cheating and looting the gullible public with promise of get rich scheme (sic),” according to the First Information Report, a copy of which was accessed by BW Businessworld. Amway has called the arrest ‘sudden and unwarranted’, saying that ‘he allegations mentioned in the FIR are frivolous and gives a misleading impression about our business’.

Money circulation schemes have been in the news for all the wrong reasons lately, with many dubious entities being set up, promising huge and immediate returns, which then soon fold up, with the promoters making off with the money collected. Entities like Q Net and SpeakAsia are under investigation currently for floating similar schemes where investors claim they have been duped.

Amway, while it operates a business model that includes recruiting new members as well as the payment of commissions based on sale value of the products sold by the recruited members, cannot strictly be called a money circulation scheme. Its officials point out that the difference is that Amway has a product of value that is being sold, whereas in the case of schemes like SpeakAsia there was no product, just a get-rich scheme. They further point out that Amway is a multi billion dollar enterprise that operates successfully across the globe in almost 100 countries, and it is the same business model that they adopt for India.

But what are these allegations? And how does the Amway CEO find himself behind bars repeatedly?

The complaint was filed by a practicing lawyer in Kurnool, Andhra Pradesh, TR Jagannada Reddy, who claims that Amway members offered him an opportunity to get rich fast. In India, get-rich quick schemes are specifically prohibited by the Prize Chits and Money Circulation Schemes (Banning) Act, 1978. According to him, he was told that by adding members into his network, he could earn commissions on the total sale value of Amway products sold by everybody in the chain beneath him.

The returns are based on a 6-4-3 scheme, he alleges, meaning that every person has to enrol 6 new members, each of who would enrol four of his own, and each of the 24 so enrolled (6 x 4) would enrol three members, thereby building a chain of 108 members. Commission rates increased depending on the number of members recruited to the chain. The complaint then alleges Amway pays a commission for bringing in new members. So in effect, the company adds more members/distributers who would sell their products by offering them a commission on better recruitments.

Daniel Pranjal, a direct selling consultant with Strategy India, pokes holes in many of these allegations. He says that Amway does not do the 6-4-3 scheme, nor does it give commissions for sponsoring, or recruiting, calling the complaint an allegation lacking substance.

If, however, what the complaint alleges is true, he says that it would amount to a violation of the law. But then again, the question is, shouldn’t it be the distributor who sold a product that was not authorised by the company who should be punished? That brings us to the curious case of the Amway CEO being arrested, repeatedly.

While the top executive ultimately bears responsibility for what happens in his company, it is rather unusual that a CEO is arrested in India, even before questions are asked. In most such schemes revealed to be fraudulent, the CEO is often untraceable by the time the scam is revealed. That is clearly not the case here.