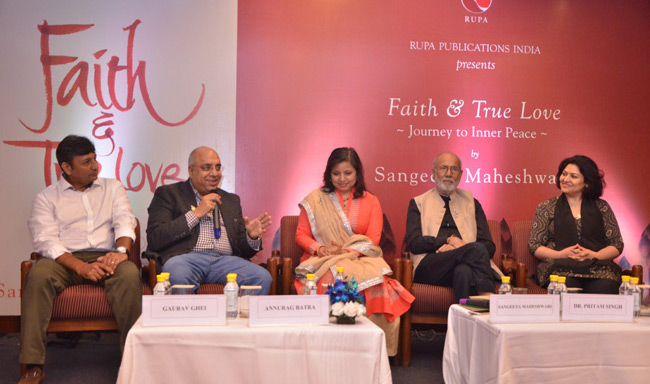 Simplicity has always been underestimated. Some cynics treat the simple joys of life with smirks. Some who position themselves as intellectuals prefer to entangle themselves in knots while trying to understand even a simple and fundamental fact of life called faith. For them, the more complicated an argument, the more long winded and ponderous a book, the more important it must be. But every now and then comes a "small" and "simple" book celebrating faith, love, giving and spirituality that holds a gentle mirror to these purveyors of cynicism. "Faith & True Love" by Sangeeta Maheshwari surely falls in this category. Don't read this book if you are looking for complex and bombastic new age arguments about the power of faith. But if you think you need a gentle reminder that small acts of live, giving, sharing and caring can transform  lives, this one is for you. And if you think that even seemingly ordinary mortals can act as messengers of a higher power even as they lead their daily lives, Faith & True Love provides inspiration in large dollops.

The book is a celebration of "Maa" who was Savitri Sharma in her ordinary life. Born to a privileged family of Rajasthan, she did what most young girls of her generation did: Spend time with loving grandparents, attend school for a few years, learn domestic chores like cooking and get married at an early age. For all outward appearances, Savitri Sharma was like millions of Indian women who,pass through the journey of life. But as Sangeeta Maheshwari describes with such simple eloquence in her book, Savitri Sharma was destined to be the Maa for tens of thousands of devotees. She and her family members had unflinching faith in a deity called Shyam Baba. In Hindu mythology, Shyam Baba was actually named Barbarik and was a son of Bheema and Ahalyawati. When the Mahabharata war approached, Ahalyawati advised her son to fight on the side of the losers. And Barbarik chose the Kauravas. However, Lord Krishna was aware of the prowess of Barbarik and persuaded him to offer his head as a donation. The selfless Barbarik did that and Lord Krishna blessed him, pronouncing that he would forever be known and revered as Shyam Baba. His temple is in Rajasthan and attracts tens of thousands of devotees.

But the book is not about Shyam Baba and his temple in Khatu, Rajasthan. It is about the extraordinary life of Maa who performed all her worldly duties even as she maintained an unflinching faith in the ability of Shyam Baba to be always there for her. Over time, her spirituality attracted devotees who were transformed by her simplicity, faith and willingness to help anyone unconditionally and without any expectations. Maa was married to a senior business executive and enjoyed the perks of life. Her faith and spirituality was unflinching even in good times. And it remained unflinching even when her husband passed away and she was forced to lead the life of a commoner.

Sangeeta first met Maa when she was five years old. From then on till 2004 when Maa passed away, Sangeeta describes how this humble and unassuming lady constantly inspired her to find harmony and balance in life. Sangeeta describes how she was a personal witness to the many extraordinary acts of faith that enabled Maa to reach out to troubled devotees and help them out. She also recalls how Maa would impart fundamental lessons of life to her as she grew up, pursued her education and hobbies and got married.

Quite simply, the book is a tribute from a daughter to her Maa. In simple words, it describes an ordinary life and human who was actually extraordinary. All of us need spiritual anchors. The author Sangeeta counts herself as one of those lucky few who did find one.