Whom Should You Blame For Your Dropped Call? 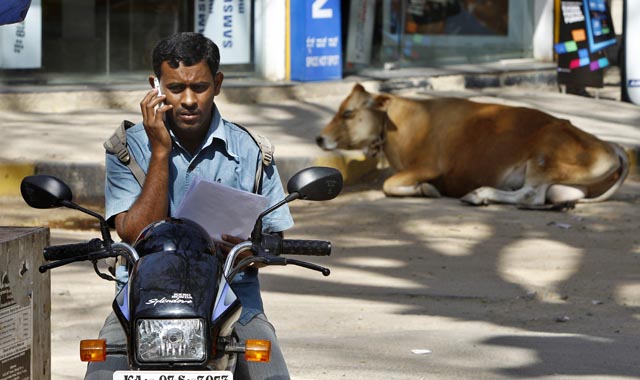 Call drops have become a part of life for Indians just like having mobile phones became a part of their lives a decade ago. However, the situation is deteriorating by the day and it is becoming impossible to have a seamless conversation over the phone in most parts of the cities during peak hours (Between 9am -11am in the morning and 5 pm -10 pm  in the evening).

The situation is so bad that despite changing telecom service providers through mobile number portability option, there is no respite for the consumers. The government is threatening telecom operators with penalties if the services are not improved but the companies  are blaming the government for providing insufficient spectrum.

Who Is Right?
The telecom minister, Ravi Shankar Prasad has categorically said that the government has provided enough spectrum to the companies and they need to invest in the infrastructure to improve customer satisfaction. In the recent round of auction, the government sold 470 MHz of airwaves.

Shankar has also discussed the idea of penalizing companies if they do not improve services.

According to some media reports, the telecom regulatory authority of India (Trai) is working on a mechanism to penalise the telecom operators for every call drop.


What Do The Telecom Operators Say?
According to Rajan Mathews, Director General, The Cellular Operators Association of India (COAI): "There is not enough spectrum with the Indian telecom operators. “In India, the average amount of spectrum per operator is between 12-15 MHz, whereas internationally it is 45-50 Mhz. How can you have better services with more subscribers and less spectrum?” asks Mathews.

Apart from this, in the past few years telecom companies have faced resistance from activists in installing mobile towers in residential areas. Many PILs have been filed in different High courts of the country against installation of mobile towers so far. Department of telecommunication (DOT) and World Health organisation have so far denied any relation between cancer or other types of health hazards and mobile tower radiations.

Despite this, the companies have found it difficult to install their towers in residential areas in the past three years. Gopal Vittal,  MD and CEO of India’s largest telecom company by revenue and market share, recently said , “We need both spectrum and more sites for mobile towers. In Delhi Lutyens area alone we need 217 sites, but we have only 117 sites. The statement came in the backdrop of telecom minister blaming the telecom companies for not doing enough to improve services.

Vittal was ruing the fact that people are averse to having mobile towers in their area.

Is this the only reason for not installing more mobile towers?

According to some experts, telecom companies are not ready to invest enough to install upgrade their infrastructure.

The spectrum auction of 2010 was fiercely fought between the Indian telecos. The telecom sector shelled out around Rs 70,000 crore to the government for getting buying the spectrum, in the hope that the 3G services will help them recover the cost. In 2010, Bharti,  won 3G spectrum in 13 circles, bidding Rs12,300 crore. This resulted in a debt pile up of Rs 10,233.10 crore on the company’s balance sheet in March 2011, an increase of 103 per cent from a debt of Rs 5,038 crore in March 2010. A part of this, debt was also taken to buy business in the Africa continent. But clearly the company has been paying a higher interest outgo since then.

The spectrum auctions in 2014 and 2015 have further dented the financials of the telecom companies restraining their ability to create new infrastructure. In 2014-15 The telecom operators shelled out over Rs one lakh crore to retain their spectrum that was up for renewable.

Global credit ratings agency, Moody’s says: “These payments will cause debt levels to rise significantly for most operators, including Bharti Airtel Ltd. (Baa3 stable) and Reliance Communications Limited (RCom, Ba3 stable), and will limit their ability to make additional investments over the next 12-24 months, possibly slowing the rollout of 3G/4G networks in India”.

Will The Telecom Companies Not Improve At All?
If the government gets tough, the companies will have to improve their services, even if it means more debt on the balance sheet for investments.

Some operators have already decided to recognize the issue.  Anil Ambani's Reliance Communications doesn't charge a customer for the outgoing mobile pulse where the call gets disconnected due to network problems. Similarly, Uninor gives a minute of free talk time within 24 hours for disconnections during a call.

If the government comes out with stringent laws to penalise poor service quality by telecom operators, chances are that every telecom company will start compensating the consumers in some way or other.

However, everything comes at a cost.  Given the leveraged balance sheets of the companies, the only way out to improve services will be to increase the voice tariffs. But, is the customer ready to pay higher cost for a glitch free call?