Who Will Blink First? 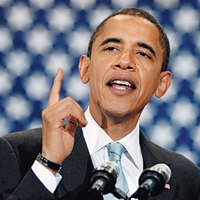 08 November, 2014
Print this article Font size -16+
According to us congressman Paul Ryan, the economy faces a fiscal abyss, not just a ‘fiscal cliff’. With Congress failing to agree on cuts to the budget deficit and debt ahead of a 31 December deadline, the economy stares at a disturbing uncertainty. Agreement was stymied on tax hikes on America’s wealthiest people and where spending cuts should take place.
Republicans want tax hikes only on those earning over $1 million a year. But President Obama wants people making over $400,000 to pay more. Republicans do not want cuts on defence spends, voting instead to extend tax cuts announced by George W. Bush and cutting spending on food stamps, health schemes for the poor, etc.
Naturally, the Democrats oppose those. If agreement is not reached, automatic cuts will come into effect and the economy could take a $600 billion hit and fall into another recession. It would also raise taxes for families making less than $250,000, and that’s not good for Democrats.
Meanwhile, each side is waiting for the other to blink.
(This story was published in Businessworld Issue Dated 31-12-2012)
Tags assigned to this article:
magazine economy obama us congress recession george w bush budget deficit magazine 31 december 2012 paul ryan