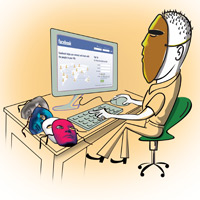 08 November, 2014
Print this article Font size -16+
First  you had to save your house from encroachers. Then it was your company’s domain name. Now rush before somebody fakes your Facebook and Twitter identity. Worse still, steals it!
The Internet Corporation for Assigned Names and Numbers (ICANN) may have taken measures to nip cybersquatting — the practice of registering domain names belonging to others with the intention of selling them for a profit — but the phenomenon is now haunting companies, brands, celebrities and individuals on social media.
“Recently on Pinterest, we found the pinterest.com/tatadocomo vanity taken by a user who even posted his contact details asking us to purchase the same from him. We filed a copyright infringement with Pinterest and reclaimed the account in a matter of few days,” says Ritesh Ghosal, head, brand marketing at Tata Docomo.
In December, cybersquatters had usurped  the identities of Maharashtra Navnirman Sena chief Raj Thackeray’s children on Facebook.
Facebook also recently estimated that around 8.7 per cent (over 83 million) of its 1 billion accounts worldwide were fake. A recent Fraud Survey by KPMG showed there was a 13-15 per cent increase in identity theft in 2011; about 75 per cent of identity theft occurred through social media.
In September, Facebook finally began a mammoth exercise to purge fake accounts. The site now verifies users by confirming mobile numbers. Other networking sites such as Twitter, Google+ and Pinterest have followed suit, but have found it harder to identify fake accounts for lesser-known firms and individuals.
This purging has had a fallout on corporate brands. Soon after the Facebook purge, a study by social media benchmarking firm Unmetric showed that most brands saw lower growth in their fan base on social media platforms than usual, indicating that fans with fake identities had been removed. It also resulted in the number of  ‘Like’ diminishing. For instance, in India, Tata Docomo lost 0.6 per cent of its fans. But Unmetric says it made up for the loss in less than a week. Currently, the telecom operator has 10,680,292  ‘Like’ on its social page.
Now, even the brands themselves have become proactive in weeding out imposters. However, where brands feel the fan communities or support groups are genuine, they allow them to exist. Tata Docomo is one such brand.
“Though fake accounts can cause damage to brands and attract negative press, the reverse also holds true. For instance, Coca-Cola’s official Facebook page started life as an unofficial page maintained by Coca-Cola lovers,” says Unmetric founder-CEO Lakshmanan Narayan. Not only did the firm decide to let the page continue, Coke introduced a few executives as administrators to facilitate and monitor the content.
With ICANN coming down hard on domain name squatters and ensuring resolution within 45 days, social media squatters should be wary. While anonymity gives security, the social media squatters may be unaware of the seriousness associated with faking identities. Pretending to be another individual or organisation is a case of identity theft, punishable with three years’ imprisonment and a fine under Section 66C of the IT Act. Pavan Duggal, an advocate who specialises in cyber law, says, “Ninety per cent of our population is unaware of this section and for this reason it is not resorted to very frequently.” So, while ignorance may be bliss, it could get one arrested!