Where To Put Your Marketing Moolah? 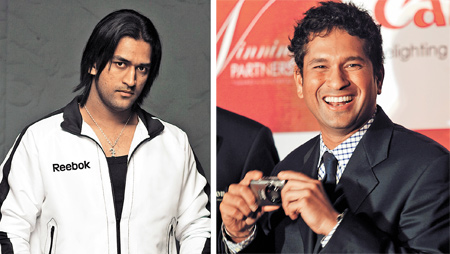 With less than 100 days to go for the ICC Cricket World Cup 2011, the sport for all seasons, the star cricketers in the game are expected to attract bigger money. Should savvy marketers put their money behind legend Sachin R. Tendulkar or charming skipper M.S. Dhoni? Businessworld kickstarts our World Cup coverage with this debate. Watch this space for more.

‘Dhoni is the epic hero archetype'

If someone asks me to choose between Sachin Tendulkar or M.S. Dhoni to put my money on, I will choose Dhoni. But it will not be for the oft repeated reasons like Dhoni represents tomorrow, Dhoni is new gen, Tendulkar does not even play most of the games, etc.

Tendulkar is possibly the most talented batsman India has ever produced. But he represents the tragic hero archetype. For Tendulkar to succeed, somewhere India has to fail. His gritty 136 when wickets are falling like nine pins makes him rise above the ordinary — and the achievement becomes folklore when India finally loses the match to Pakistan. In an otherwise mortal effort, his heroics reach the proportion of immortality. The cost of the immortality, however, is India losing the match.

Dhoni, on the other hand, is probably closer to the epic hero archetype. Epic heroes have no superpowers, but they are smart, brave, and have fears, which they overcome to protect their friends, families and countries. Dhoni has a lot of flaws as a batsman, as a wicketkeeper and even as a captain. But he has learnt to overcome them for the benefit of India. Dhoni's heroics become pronounced only with an Indian victory. So the bigger Dhoni becomes, the more India wins. Dhoni's success is incomplete without India's success as a team.

A recent study by an econometrician has created a major controversy around Tendulkar's contribution. The model conclusively proves that when it comes to contribution to India's cause, there are other players who are ahead.

Cricketing minds are going nuts disproving this theory. But they forget a simple fact. It does not make Tendulkar a lesser hero. Watching him produces catharsis in the audience (a feeling of "emotional purgation" that an

audience feels after witnessing the plight of a tragic hero) — we feel emotionally drained, but exultant. India's loss is a part of the plight.

Dhoni also hails from a modest economic background. But his bikes and dogs are written about more often than his humble past. An epic hero does not need to show his rise above the ordinary. He has to make the ordinary more precious, more enjoyable. India is getting comfortable with the idea of success and progress and hence, our need for extraordinary is much less today. We don't need to live vicariously through superhuman efforts that challenge the destiny of a defeatist nation. We are more likely to gravitate towards mortals who overcome obstacles to deliver success.

If we looked at the old discourse of brand as an enabler, Sachin Tendulkar made sense. Like him, the brand was to allow the average Indian to dream beyond his capabilities; vicarious living of sorts. But today's India demands a different discourse of brands. Brands are no longer enablers; they serve a clear purpose in our quest of living a successful life.

Dhoni's DNA is firmly entrenched in the art of successful living. So a brand trying to connect with the newfound confidence of the average Indian would do well to use Dhoni as the face of the brand. Using Tendulkar as a face will often be driven by lack of ideas — he is a classic saliency builder. Dhoni, however, can be used to narrate a story of new India. Unfortunately, most brands using Dhoni are still stuck in the old paradigm of ‘celebrity'. Dhoni has the power to let the ordinary Indian celebrate life, just like the way he makes us feel good about ourselves with every Indian victory.

‘It is the longevity of Sachin'

I am not really an ambassador for the euphemistically titled ‘brand ambassadors' who grace our lives in multimedia splendour everyday. Much better, say I, to put those megabucks into improving your products and service(s), and making the customer the centrepiece of your marketing instead of the ambassador's bank account.

But alas, mine is a voice in the wilderness, and so I must give you my two shekels' worth of advice as to where you will waste less in the Tendulkar or Dhoni debate that has got our television anchors all breathless these days as their respective sponsorship (oops, sorry, ambassadorship) numbers take on all the exciting contours of a Sports Illustrated swimsuit cover model's vital stats.

It is always an intriguing battle: the new kid on the block versus the gnarled old pro.

Yes, new kids are exciting; they bring a frisson of the type the anticipation a new gadget or a new romance brings, of the ‘will it, won't it, or will she, won't she' type. And yes, we do need new things, if only to put the old in perspective and what's worth keeping with us.

Now don't get me wrong: Mahendra Singh Dhoni is much different from the one-match (or even one-year) wonders we get to see so often these days. Dhoni comes across as down to earth, speaks his mind, is cool under pressure and has cut his hair — what more can we reasonably expect?

But he has been around only a few years. Where will he be in 2025? The Concorde came and went despite being hailed as the last word in commercial flying.

And that is the the jillion-rupee question.

Cut to Sachin R. Tendulkar. If it were indeed a gnarled old pro (who now only speaks from the television commentary box and talks about the good old days) we were talking about, perhaps we would close the book then and there, and say all bets were off.

But Tendulkar is none of the above. In an age of quick fixes that don't quite stick, of ephemeral and airbrushed successes in a T20 game, of artificial substitutes for almost everything (rubber sex dolls, egad!), of virtually virtual everything (farms, pets and soon, even humans), of displays of human frailty, venality and vanity viewed a million times a day on our television screens, of words like ‘great' being used ad nauseam ("that was a great banana"), there is a model of honesty, integrity and sheer hard work that sets an example, which we should all follow but seldom do, and that is Tendulkar.

Oh, it is not the records; not the most number of runs, the number of centuries and so on that I am talking about. It is the longevity of the man who started his career in a day and age when there were no mobile phones, when he travelled by bus to train, and when all those who were there in 1989 are today paunchy pundits who dye their hair in feeble attempts to show they are still young.

This longevity stands out even as, or in spite of the fact that the overall tempo has become faster, the game itself more demanding physically, and the rewards enormous even for mediocrity. Because it is a longevity founded on the basics: hard work, humility and integrity, without a whiff of scandal or being in the news for all the wrong reasons. A successful longevity, which should be the only thing any marketer worth his tweets should aspire to have for his brands.

So I have only three questions to ask as you get ready to take a decision on whether to plunk your marketing money down on rouge or noir:

I rest my case.