Where Is The Dart Board? 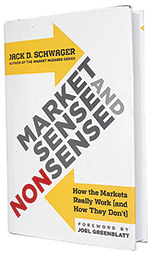 08 November, 2014
Print this article Font size -16+
Reading Jack Schwager is entertaining as he demolishes several established shibboleths on market and exposes theories that have been held sacrosanct for years. He takes on as many as 50 investment misconceptions and con­vinces the reader that he has been ‘had’ in case he follows such advice. For one, Schwager shows from CNBC clips as to how experts proved to be an embarrassment during the financial crisis. How does he explain these fallacies? When we try to explain how markets work, we use neatly constructed models and theories as they are convenient. Often, the data we use for building models is not representative of the current situation and this is why we tend to go wrong. So, there are biases inherent in such approaches.

Theories are erroneous and models unrealistic and with our cognitive biases and unsubstantiated beliefs, we err often.

Further, the much sacrosanct ‘efficient market hypothesis’ is demolished easily by the author as the assumption that the price reflects all information is incorrect as past data is not relevant and we cannot beat the market by using public information because everyone has it! Schwager says following experts is as good as aiming at a dart board without looking.

Often, we use volatility as a measure of risk and link returns accordingly; and hence run the risk of using an incorrect metric that does more damage than not using any such indicator. It is something like driving sans a speedometer being better than having an incorrect indicator.

Interestingly, Schwager also dwells a lot on the pitfalls of going by track records of stocks as we end up looking at irrelevant data. Even more blatant is how he attacks the misconception of ‘manager skills’ and shows how portfolios have done well due to the high risk carried rather than the manager’s acumen. And we should never be guided by the names of  fund managers — something which we often do.

While bursting all these bubbles, he does not spare the VAR models (value at risk) that in 2007 showed how the portfolios were stable when the risk inherent was enormous. At a later stage, he moves to hedge funds and is, in fact, a fan of them. He debunks the theory that a hedge fund portfolio strategy is riskier than the traditional approach. In fact, by combining short selling with long positions, managers are able to provide better returns to investors. But he admits that technical analysis has less to do with the success of these funds.

The author is brazenly irreverent at times but never sounds irrelevant. He is quite direct in his approach to attack generally accepted theories and has a view on virtually all aspects of the thought processes in this filed. Let us look at some of them. He says: expert opinion does not matter; markets are not efficient; buying when the market is low to sell when it rises is not the most prudent practice. And more:  the past is no indicator of future returns and as a corollary, concentrating on funds that had the best past record is fallacious. In fact, hedge funds do better than mutual funds because decisions are not linked with the market. Leveraged portfolios often carry less risk and therefore it depends on the assets in the portfolio. Therefore, leverage does not tell you anything about risk.

It is a delightful book, and should be read by everyone in the market. Mainly by those that want to take a shot at the dartboard.