Where Is 4K Technology Headed To In India? 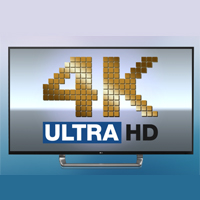 10 March, 2015
Print this article Font size -16+
Ultra-high definition or 4K LED TVs have had a sluggish start and manufacturers have been struggling to sell units across the country. Keeping aside the high price tag, one of the primary reasons for the slow progress has been the limited amount of content available as there are hardly any channels that broadcast 4K content anywhere in the world. The only small source of 4K content that one can enjoy is available through YouTube and other streaming services, that too in limited numbers. Another major constraint comes in when broadcasters need to transmit 4K content to the consumer as there is a requirement of large amount of bandwidth.

DTH providers Tata Sky and Videoconhad recently announced their very own 4K based set-top boxes becoming the first in the country to provide such service. However, there is a catch, since there are no official 4K based channels there will be only one channel dedicated to 4K content. This channel will show the high-quality content from various sources and the most attractive content would be the on-going ICC Cricket World Cup as some of the matches are being broadcasted in 4K resolution. Anil Khera, Chief Executive Officer of Videocon d2h said “While there are other service providers that have set-top boxes, we are the first to launch a platform for content in 4K UHD. The World Cup will have some matches in 4K UHD, and the channel will air the India matches and the semi-final and final.”

A Tata Sky official confirmed to us that they are now ready with the technology and hope to provide more sports content if and when the broadcast is done in 4K. Other than sports, Tata Sky and Videocon have confirmed that they will be showing shows from various international sources including Discovery, Nat Geo and more.

The progress from SD to HD was quite a slow process but will the progression from HD to 4K take a similar time-frame? According to a Samsung sales person, “We have seen a decent amount of interest from the consumer in 4K televisions and as they become more affordable, the consumer will vouch for them and demand 4K content which the broadcasters will have to provide in due time.”
Tags assigned to this article:
science and technology tech talk more 4 kunal khullar 4k technology