Where Have The Suiting Brands Gone? 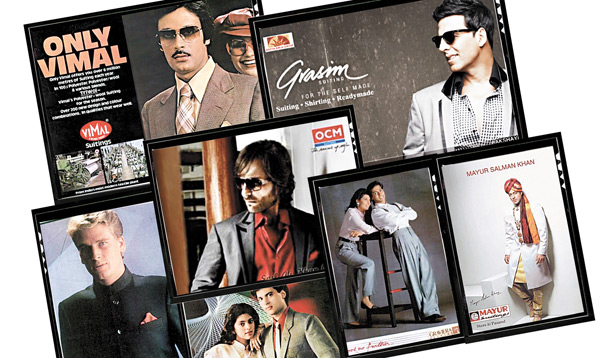 Before Shah Rukh Khan earned the moniker SRK, his fans knew him as Shah Rukh ‘Mayur’ Khan, thanks to his endorsement of Mayur Suitings that dominated commercial airtime on television in the mid-1990s. Around the same time, there was Dinesh Suitings. Its innings with the original little master, Sunil Gavaskar was a long one — the legendary cricketer endorsed the brand for over a decade starting in the early-1980s when he asked the consumers to ‘take the world in your stride’. Another memorable cricket-suiting endorsement affair was Gwalior Suitings’ advertisement featuring cricketer M.A.K. ‘Tiger’ Pataudi and his actor wife Sharmila Tagore with their son, Saif Ali Khan, joining them later on screen. Vimal, another iconic Indian suiting brand, was once endorsed by cricketers such as Vivian Richards and Allan Border.

Take the case of OCM India which is now on a comeback trail. The history of the S.K. Birla company dates back to 1924. From hand-woven carpets, it went on to become a leading men’s apparel fabric retailer and manufacturer, with a large integrated plant in Amritsar. Over the years, OCM lost its market leadership, went downhill and was finally taken over by the US-based private equity firm WL Ross & Co. in 2007 for $37 million. Now WL Ross owns 94 per cent stake and the rest is with HDFC. OCM is trying to revive its fortunes through modernisation and an image makeover and is targeting the 25-35-year-old bracket.
Or look at the irony of Dinesh Suitings. Once upon a time, its advertising tagline was ‘Decades later — still the same leader’. The brand then had ace cricketer Sunil Gavaskar (in his prime) as its ambassador for 11 consecutive years. Now, can it afford the luxury of having a Sachin Tendulkar or an M.S. Dhoni endorse it? Seems unlikely, looking at the financials of the 75-year-old worsted suitings maker. Its sales turnover in 2010-11 was a meagre Rs 82 crore and net profits Rs 7.97 crore. Take Dhoni or Tendulkar on board and that endorsement will wipe out the entire profits. In the last five years, net sales did grow marginally, from Rs 72 crore to Rs 82 crore, but net profits never crossed the Rs 10-crore mark. Total liabilities of the company are more than Rs 134.46 crore. Shri Dinesh Mills is trying to revive its heyday by entering into new areas like geo textiles, consumer and industrial textiles and gelatin capsule manufacturing.
Digjam, once famously endorsed by actor Shekhar Kapur, Bhilwara Suitings, Grasim Bhiwani Textiles (its well known suiting brands, Grasim and Graviera, compete mainly in the polyester-cellulosic segment), Donear and many others have similar stories to share.
An exception to the industry has been Siyaram Silk Mills, India’s largest blended fabric maker and marketer of brands such as Oxemberg, J. Hampstead and MSD. Its sales grew from Rs 394.25 crore in 2005-06 to more than Rs 858.69 crore by 2010-11. Net profits, which dwindled to less than Rs 10 crore in 2007-08, bounced back to over Rs 57.64 crore by 2010-11. “Net sales and PAT of the company are expected to grow at a CAGR of 18 per cent and 31 per cent between 2010 and 2013, respectively,” says a recent Firstcall Research report.

Analysts attribute Siyaram’s strength to the fact that its brands are sold in more than 40,000 outlets across the country and the company’s wide range of machinery in its plants at Tarapur, Daman and Mumbai. But a worrying factor for the company is its liabilities, which mounted to Rs 486 crore in 2010-11.
Nabankur Gupta, founder and CEO of Nobby Brand Architects, and a former senior executive at Raymond says that in the category of suitings, companies that have made constant investments in the latest technology have stood the test of time. “New fibres and blends need a lot of technology and expertise. Those who do not invest fall by the wayside.” Tarun Joshi, group director of S. Kumars Nationwide (SKNL) agrees: “The ability to create a brand will revolve around consistent product quality, pricing, placement and distribution and promotion. Consumer preferences and loyalties change dramatically and many suitings brands failed to understand this.”
Suits Me Fine
Celebrities have been synonymous with suiting advertising. But branding experts like Gupta feel that in many cases, the celebrities endorsing the suiting brands do little to improve the fortunes of the brands they endorse. “The use of celebrities probably shifted the focus away from the product,” says Gupta. “In Raymond’s case, the brand and not the celebrity is at the centre of the campaign,” says Shailen Sohoni, COO, RK Swamy BBDO, an advertising agency. Brand experts like Sangeetha N., executive director, RK Swamy BBDO, which handles the Raymond brand, say that in the suitings category in particular, advertising has a direct co-relation to the action at the point of sale. “It’s not unusual for consumers to walk in with a clipping of a print ad and ask for that particular suit piece,” she says.
Even in terms of television advertising, the readymade garment brands are overtaking the suiting brands. In 2009-10, readymade brands spent around Rs 20 crore on television while suiting makers had an ad spend of a little over Rs 43 crore. But in 2011-12, readymade brands spent nearly Rs 43 crore while the spends of suiting brands dropped to Rs 35 crore. But it’s not as if their overall ad expenditure has come down. It’s just that with suiting brands making inroads into smaller towns, ad spend has shifted to print from television.
Raymond, on its part, has spent close to Rs 950 crore on advertising over the past 10 years. This compares to Rs 220 crore to Rs 440 crore for its competitors Siyaram and SKNL, respectively, points out a UBS research report released in mid-April this year. “Raymond has never used celebrities in its communication and instead uses the money that would be spent on hiring the celebrity on advertising our products,” says Aniruddha Deshmukh, president-textiles, Raymond.
But there are exceptions to that rule, say others. The brand that has created the maximum impact in the last 14 years has been SKNL’s suitings brand Reid & Taylor. Launched through a joint venture in 1998, the brand contributed Rs 929 crore or 18 per cent to the Rs 5,223 crore revenues of the company in 2010-11. The worsted suitings range was first promoted by Pierce Brosnan in his James Bond avatar and is now promoted by Bollywood legend Amitabh Bachchan. The company’s blended fabrics range of Belmonte is endorsed by Shah Rukh Khan. The company is setting up a new suitings factory at Bangalore to add to its suitings manufacturing facilities at Mysore in Karnataka and Dewas in Madhya Pradesh, besides other capacity  expansions. SKNL’s Joshi says the decision to stick with Amitabh Bachchan since 2004 is paying off and the brand is growing at over 30 per cent year on year. The company spends over Rs 70-80 crore a year on various media.
But why would suiting makers continue to invest when the business has not been favourable in the past? Because the future looks promising. Earlier, one purchased one’s first suit at the time of the wedding of a family member. Wearing suits was restricted to job interviews, going abroad on work or a business trip. But times are changing. The B-school culture where every student has at least one (if not two) suit to wear for various college events and placements, is good news for the suitings companies. Suits are also in demand among an increasing number of professionals who go abroad on projects. Then, of course, networking has become part and parcel of executive lifestyle. And, suits go hand in hand with such activities.
The suiting industry is fighting back and refuses to be written off, just yet.
prasad(dot)sangameshwran(at)abp(dot)in
(This story was published in Businessworld Issue Dated 27-08-2012)
Tags assigned to this article:
magazine prasad sangameshwaran pb jayakumar textiles grasim raymond brands bombay dyeing magazine 27 august 2012 suiting brands rediffusion vimal reid and taylor sknl ocm