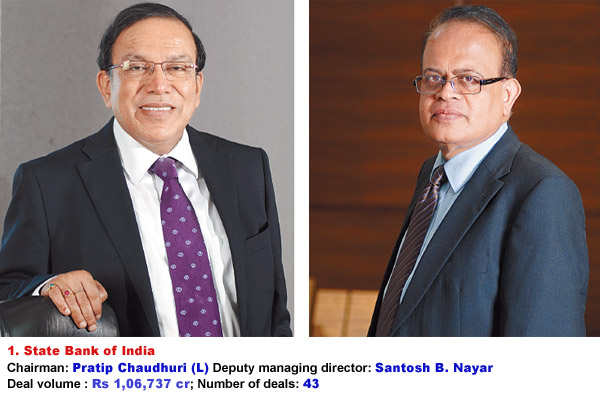 08 November, 2014
Print this article Font size -16+
Ask Santosh Nayar which loan deals were among the more difficult ones to handle in the past 11 months and he will name Electrosteel and Videocon Industries. The deputy managing director and group executive at State Bank of India (SBI) says that while Electrosteel’s case was unfortunate, Videocon’s was a cash flow mismatch.

Electrosteel had started production, but the visas of its Chinese workers did not get extended in time; the land allocated to the project was changed, increasing project costs by 40-50 per cent. Videocon’s cash flow was disrupted largely due to the slowdown in Indian business.

But despite the hiccups, SBI is still the biggest arranger, underwriter and syndicator in the Indian loan market.

In an environment where credit requirements are down 40-50 per cent in 2012 compared to 2011, SBI was involved in 43 deals with Rs 1.06 lakh crore out of the Rs 1.69 lakh crore raised in the overall domestic market.

That translates into a market share of 63 per cent, making SBI number one, India’s biggest domestic loan house in the first edition of the Businessworld Magna Awards 2012.

Business with large corporate houses has grown by 25 per cent. “The problem is in the mid-corporate and SME business,” says Diwakar Gupta, managing director and chief financial officer at SBI.

Nayar says client companies have been coming to his bank to restructure the tenor of loans, from short to long-term. “We see some disbursements of the earlier loan coming up, and some takeovers happening due to our rates being good, basically to reduce costs,” says Nayar.

SBI’s balance sheet helps. It is very large, and has the lowest cost of funds thanks to the sheer scale and size of its low-cost current and savings account (Casa) deposits. Despite that, Nayar says, compared to last year, SBI is assessing the risk much more minutely.

That counts, especially when the bank has a role to play in every major deal, whether it is restructuring large public sector firms such as Air India, or large private corporates such as the Jindal Group or the Essar Group, to name just two.

And it’s not just companies either (SBI has the reputation of being able to help very large companies, for whom it is the go-to bank when they are under stress); it is also the other banks that, may be part of an SBI-led syndicate, seeking to sell their loans because their balance sheets or asset-liability positions are under pressure. SBI often comes to their rescue.

“We help them for an extended period, where we find risk is little, or the company is facing short-term problems but in there is prudence long-run and has assets and facilities,” says Nayar. “We believe that the assets will pay back by themselves.”

What does this mean for SBI in the coming 12 months? “Loan growth looks muted,” says Gupta. “When project execution is slowing down, it is hard to underwrite or increase loan disbursements.” Credit requirements and demand have to go up first, Nayar avers.

But whether it takes longer or business revival kicks in earlier, SBI’s domination of the domestic loan market is going to be the one constant. Being big is beautiful.

Most of us are familiar with metaphors that describe bankers as being people who are willing to give you an umbrella when it isn’t raining. But that does not exactly reflect reality. Take the case of Videocon Industries. It has a Rs 27,300 crore of debt on its books; a slowing economy has not been kind to its consumer and home electronics business. That debt was a mixture of short-term and long-term credit that could play havoc with the firm’s cash flows from its different businesses (from consumer electronics through power and telecom services to oil and gas exploration).

Given the difficult conditions in the economy and the stress on various banks’ balance sheets due to deteriorating asset quality, lenders were being extra cautious about the kinds of risk they could take on their books. Enter IDBI Bank and SBI Capital Markets, who put together a loan syndication deal that involved more than 25 banks, and an amount of over Rs 16,800 crore.

“It was a refinancing of existing debt that would consolidate the firm’s debt across its businesses into a single, 10-year loan,” says Vinay Kumar, executive director, IDBI Bank. “On the one side, we pooled all the debt and, on the other, we pooled all the security (or collateral assets).”

Bankers call it an ‘obligor to obligor’ transaction. It means cash flows from any one of the businesses can be used to meet debt service needs of other business covered under the consolidation loan. By pooling the short- and long-term debt into one single loan, meeting interest and principal payments and managing cash flows at the consolidated entity becomes easier.

A transaction of this nature also involves some additional funding, and it was no different in this case. “We did a few additional deals that takes financial support to Rs 40,000 crore,” says Kumar. That includes some financing for capital expenditure for the company’s Rawas oil field. Separately, IDBI Bank and SBI Capital syndicated a standby letter of credit of $2.2 billion for Videocon with 12 Indian banks for investment in its Mozambique and Brazil oil fields.

Isn’t putting so many eggs in one basket risky? “We have had a long-standing relationship with Videocon, as have many banks in the syndicate,” says S. Vishwanathan, then managing director (MD) of SBI Capital and currently MD at the parent SBI. “It wasn’t a hard decision to make.”

IDBI’s Kumar concurs. “The oil and gas assets of the company are significant, and will more than return the money invested in them,” he says. “In fact, oil and gas could well be the principal business of Videocon in five or so years.”

That optimism doesn’t mean he forgets he is a banker first. The loans are secured with a lien on the profit from the company’s various oil and gas assets. Kumar and his counterparts in SBI Capital know what they are banking on.