When Help Is At Hand 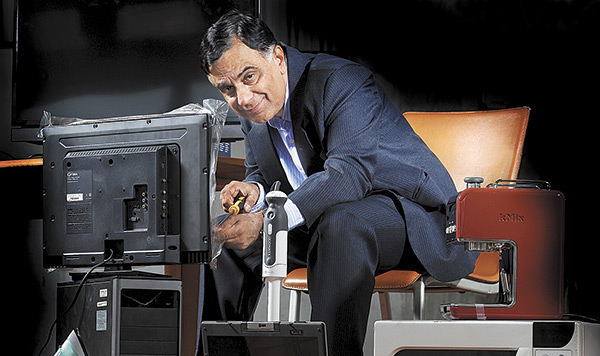 08 November, 2014
Print this article Font size -16+
For 33–year-old Deepa Sharma, a single mother, it was a nightmare. Just 12 days after moving to Bangalore from Delhi to take up a job with a leading technology services firm, a severe voltage fluctuation at her rented flat left several of her gadgets and electrical appliances damaged and unusable.
“Between a new workplace, a new city and settling into a routine with my four-year-old son, right from the electric stove to an unbranded Chinese kettle bought on eBay, several of my appliances had suddenly gone kaput. Even my trusted refrigerator and washing machine were malfunctioning.

I was in a state of panic, trying to locate bills and service centres. That’s when I heard of Jeeves.”
For fans of English humorist P.G. Wodehouse, the name Jeeves conjures up the image of an intelligent, trustworthy, resourceful and omnipresent Man Friday who comes up with ingenious solutions against odds. When R.N. Balasubramanya, a veteran of several consumer appliance firmss such as BPL and Sanyo, was looking for a name for his company, ‘Jeeves’ had a natural appeal.
With most of India’s over 200 million households increasingly getting crammed with multiple electrical gadgets, servicing and maintaining them poses a challenge. Each household has multiple brands and once the appliances are out of warranty, getting prompt service support and genuine spares becomes difficult.
Balasubramanya, or Bala, as he likes to be called, wanted to address this opportunity through Jeeves. “In 2007, an American DVD player company called DVS was looking for somebody to support their after-sales service. Around the same time, Future Group’s Big Bazaar began selling mostly imported Chinese appliances under the Koryo brand, and was looking for somebody for pan-India after-sales service and support. That’s  how Jeeves Consumer Services was born.”
Jeeves offers third-party, after-sales service for out-of-warranty products across India. Till six months ago, it mainly functioned as the outsourced service arm of not only Koryo but also in-house brands of other wholesale and retail chains such as Metro Cash and Carry, Vishal Mega Mart, Croma and More. It has also tied up with 35 leading brands such as Toshiba, Philips, Sanyo, Croma, TCL, Westinghouse, Kenwood, Micromax, Nova, Softel and Genus, to offer exclusive service and support to their products across the country, even during warranty.
So what about some of the leading Korean brands like LG and Samsung, which have been successful in India partly because of their after-sales service? Also, isn’t after-sales service an additional source of revenue? “For most players, after-sales service is not a core area. Even when offered, it is primarily to in-warranty products. They tend to over-price out-of-warranty support. That is where we come in. We don’t necessarily compete with service arms of those players; we complement them,” says Bala.
With 275 service points — 25 company-owned (the rest being franchisees)  — across 14 states, Bala claims Jeeves covers most of India, from Srinagar in J&K to Nagercoil in Tamil Nadu. Jeeves offers two packages. One is a back-end customer relationship management (CRM) package, with a dedicated call centre and a toll-free line. The other is a pooled service (B2C, or business to consumer). In the dedicated CRM-based service, the end users will not know that it is a Jeeves technician repairing their gadget. In the cheaper pooled service, Jeeves identifies itself and provides the service for a price. “We offer annual maintenance contracts — service charge is Rs 499 for any device; spares come for actuals. We also provide preventive maintenance. Initially, we launched only in Bangalore, but are now rolling out nationally. Even as a single-city offering, we are signing up 350-400 customers every month,” adds Bala.
Like most service-based businesses, this one, too, is manpower-intensive with thin margins. For Jeeves, attrition is 24-36 per cent on an annual basis. Also, frequent introduction of new products means technicians have to upgrade their skills often. “Over the years, we have realised that soft skills are as important as technical skills. Indian etiquette, for instance, demands removal of footwear before entering a house. The workforce is largely migrant labourers with basic skills; they need to be taught soft skills on how to talk and work with customers,” says Bala.
Competition from neighbourhood electricians keeps prices and margins low. Besides, there are Adonis Electronics from the Onida Group and Reliance Rescue. “Adonis is mostly focused on in-house brands. And why would Croma use Reliance Rescue? Other players are limited at best to a state,” claims Bala.
The other problem that service providers face is of big brands often not selling them spares to keep prices high. Bala has an answer for this, and other bumps. “Over time, we have established good relationships with major brands and spare parts distributors. To keep costs low and avoid locking up working capital, we source parts and components just in time. To keep attrition low, we provide benefits like employee state insurance and provident fund coverage. And we work closely with franchisees to maintain service quality,” says Bala.
The opportunity was not lost on investors. In June 2012, Jeeves received an undisclosed sum (Rs 12 crore, say sources) in Series A funding from venture firm Seedfund. At the time of investment, Bharati Jacob, partner and co-founder of Seedfund, had said the funds would be primarily used to expand the network of service centres. Bala expects Rs 14 crore revenues for 2012-13, and targets the Rs 100-crore mark by 2016.
Only time will tell whether Bala’s Jeeves is as forthcoming as his namesake with solutions.