When Entertainment And Media Converge 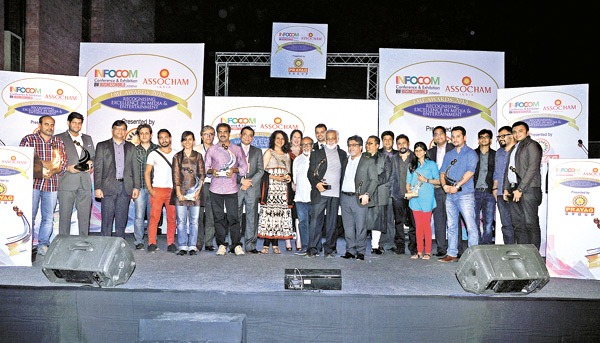 08 November, 2014
Print this article Font size -16+
The third edition of the METS Forum, an event jointly organised by Infocom and Assocham, kicked off on 8 March in New Delhi. The theme this year was technological convergence in the fields of media, entertainment, telecom and social media. METS Forum 2013 was inaugurated by Manish Tewari, MoS, Information and Broadcasting. Uday Kumar Varma, secretary, Ministry of Information and Broadcasting, D.D. Purkayastha, managing director and CEO, ABP and chairman, Infocom, and Rajkumar Dhoot (MP), president, Assocham, were present. Tewari, in his address, touched on issues such as censorship, freedom of expression and the responsibility of citizens with the coming of new media. “Each individual becomes a broadcaster with the power to put his views in the public space. The government has no desire to control new media. But as concerned citizens, we need to make the distinction between the right to privacy and the right to anonymity,” said Tewari.

The event began with the release of a report by PricewaterhouseCoopers — ‘From Silent to Digital-100 Years of the Indian Film Industry’. The forum felicitated Padma Bhushan winner D. Ramanaidu as a legend of Indian cinema, Basu Chatterji for his lifetime achievement and Shah Rukh Khan as the actor of the decade.

Arijit Dutta, MD of Priya Entertainments, described the role of multiplexes in changing the landscape of the film industry during a panel discussion on ‘100 Years of Indian Cinema — Expectations of the Millennium Generation’. Other panelists included filmmakers Ramanaidu and Aniruddha Roy Chowdhury.

A Japanese perspective on media and entertainment was brought in courtesy the keynote address by Mitsuhito Hosoda, senior managing director, Shochiku, a film and theatre company. He spoke on ‘A Centennial of Japanese Cinema’. Juntaro Shimizu, deputy director general, Japan External Trade Organisation, called for greater Indian and Japanese collaboration in Indian cinema.

A special poster exhibition was hosted on ‘Revisiting 100 Years of Indian Cinema’, courtesy S.M.M. Ausaja, vice-president, Osian’s Learning Experience. Ausaja is also known as the ‘Poster Man of Bollywood’.  The exhibition sought to showcase the journey of Indian cinema through a collection of inspiring posters.

The final event was the Excellence in Media and Entertainment (EME) Awards — an initiative to recognise excellence in animation and VFX, and innovation in film technology. The occasion was attended by communications and information technology minister Kapil Sibal.  He talked about the revolution that was taking place in entertainment, and highlighted the role of the government in extending connectivity to 1.2 billion people in the country, via the fibre optic network. He concluded a discussion on freedom of expression and the need for self-regulation by the media with: “Tera toh haq hai khabar chalana, kuch mere bhi haq hai mat bhool jana. (It is your right to broadcast, but don't forget, I too have some rights).” The awards saw  530 entries from 28 countries across 12 categories.The principal sponsor for the event was Prayag Group, with associate sponsors SAP, Adobe, Star TV, Priya Entertainments and Mainland China. Parker was the official writing instruments partner for the event.