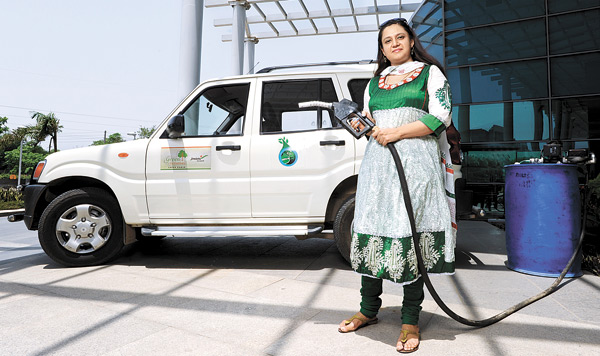 08 November, 2014
Print this article Font size -16+
The views on economic feasibility of biofuels are divided. The nay-sayers say biodiesel needs a large infrastructure and proper supply chains — both missing in India. But Earth100, a five-year-old company, is out to prove them wrong. In May this year, the company has put out a fleet of 10 cars (Mahindra Scorpios) fuelled by 100 per cent bio-diesel. Before that, as a pilot, it was operating two such cars for Jindal Steel & Power (JSPL) since January 2013.
Offering a leasing solution, Earth100 is working with manufacturers, corporate houses and government to promote biofuel.
Founded in 2008 under the NODWIN group of companies, Earth100 started out as an execution wing of an idea proposed to Goldman Sachs’ Bangalore office to reduce their carbon footprint. “Goldman Sachs asked us to come up with out-of-the-box ideas to improve the Bangalore office’s energy consumption. We suggested bio-diesel cars, which they liked and wanted us to implement,” says Megha Rathee, Earth100’s COO. Initially, Earth100 was reluctant to execute the idea, she says, but wanting to prove the commercial viability of such vehicles decided to plunge in.
The first project failed owing to poor quality bio-diesel from a private vendor in Gujarat. “We had some amazing successes and some disastrous experiences, and realised that the quality of biofuel was not consistent,” says Rathee. So Earth100 switched to Chhattisgarh Biofuel Development Authority (CBDA), which gave them Jatropha-derived fuel at Rs 42 per litre. “We then decided to move to leasing such cars to others,” says Rathee.
The next stop was JSPL. Sushil Maroo, director at JSPL, says the company agreed to Earth100’s proposal as it wanted “to minimise the use of fossil fuel and support use of biofuel”. Of the 60 cars at JSPL’s Gurgaon office, 10 are run on biofuel by Earth100. “We are willing to add such cars,” says Maroo. The cars have been hypothecated to Jindal Power, and will be transferred to it after four years. “The key reason for going along with this model of leasing was that in this process, we are creating our own asset while promoting a green initiative,” says Maroo.
Under the current model, Earth100 buys the Scorpios at about Rs 9 lakh per unit, and an additional Rs 25,000 for the modifications (most of which is absorbed by Mahindra & Mahindra, or M&M, as it has already invested that money in R&D). “They (M&M) want this to succeed to a scale where they can go to the mass market with it. We are essentially their experiment bay,” says Rathee. The fuel, bought from CBDA, is provided to the lessor from a dispensing stall that Earth100 sets up on its premises.
Earth100 has company-specific contracts. Based on the number of cars and the distance that each car has to run, it charges Rs 12-22/km. The capital to buy the cars and set up the supply system comes from the lessor company, and is paid back to it. “It is a kind of a no-interest loan that the company wanting to implement bio-diesel cars gives us. In return, we provide the supply chain for running the cars,” says Rathee.
Earth100 is 70 per cent owned by Akshat Rathee, NODWIN’s founder; 20 per cent is held by JSPL (who invested in Earth100 two years back); and another 10 per cent is with a private investor.

The initial investment, however, was from Goldman Sachs, says Rathee. Operationally, Earth100 has been profitable from the beginning, she says, as it is simply buying the cars and the fuel and putting the two together for another company.
With only 10 cars on the road and another dozen in the pipeline, Rathee agrees that Earth100 is a small player. But the plan is to raise the number of such cars to 50 by the end of 2013, and have pilot projects in Bangalore and Mumbai as well. She also says that Earth100 can have 200-300 such cars over the next three years. “The idea is to make it profitable. We don’t want to be a charity because that is not sustainable in the long run.” Earth100 is tying up its model to CSR requirements of companies on the argument that biofuel is an economically feasible green solution.
Rathee says using biofuel can reduce a company’s diesel bill (see ‘When It Makes Sense’), as well as increase the vehicle’s life by three years owing to the better quality of the fuel. Also, though the fuel used in India to run vehicles can be mixed with 5 per cent biofuel, it is set to increase to 20 per cent by 2017. Most vehicles at present can run on 20 per cent blends.
But the biggest hitch in the plan is that biofuel is not openly available and no private player is permitted to sell it. The domestic market is limited and the supply is erratic. In addition, there are concerns that large-scale conversion of crop land to oilseed plantation will hamper food security.
Rathee argues that Jatropha is just one source, and that the company hopes to move to third-generation biofuels derived from algae. “We have tried different feedstock, and believe biofuel has multiple sources. For example, in India, we could use cooking oil. The wasted oil from street food joints can be converted to biofuel — it is being done all over the world, why can’t it be done here?”