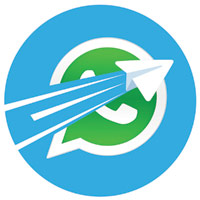 08 November, 2014
Print this article Font size -16+
Facebook forked out a whopping $19 billion to bring WhatsApp to its fold. But there were other big gainers too from the dizzying deal.

Shortly after the deal was announced, Telegram, a rival messenger platform, suddenly found millions flocking to its service. The first rush began soon after the deal was made public — largely on privacy fears. Unlike WhatsApp, Telegram, built by Paul Durov, founder of Russia’s largest social network VKontakte, is heavily encrypted. Basically, it was built to withstand any infiltration by Russian security agencies!

So, it has a secret chat feature using end-to-end encryption, in which a message can be read only by the sender and the recipient — not even the Telegram staff can read it. Also, it cannot be forwarded.

The second rush — nearly 5 million new users — to Telegram happened when WhatsApp suffered an unexpected outage for a few hours.  According to tech experts, Telegram has a host of additional features, including the option to create message threads that self-delete (just like SnapChat) and cloud functionality. That also explains why this particular app is being chosen over other messenger services as an alternative.

So, is this the next app waiting to be gobbled by the giants of the digital world? Durov has categorically said the app is not up for sale. But, who knows what will happen when a hard-to-resist multi-billion-dollar deal comes along?

BRAND BUZZ
A Chinese Offering
Sina, proprietor of the Chinese micro-blogging platform Weibo, is reported to be keen on listing a spinoff of the platform on the New York Stock Exchange. Experts have estimated Weibo’s valuation to be around $4 billion. Reportedly, Goldman Sachs and Credit Suisse have been hired to manage the flotation. Alibaba, the e-commerce giant from China which has an 18 per cent stake in Weibo, is also reported to be planning an IPO. Looks like the dragon is all set to take on the eagle on its own turf.

DIG THE DATA
Pretty Picture
As many as 55 million photos are uploaded on Instagram daily. The photo and video-sharing platform gets around a thousand comments and 8,500 ‘likes’ every second, according to socialmediaslant.com

Mobile Link
With some 41 per cent LinkedIn users logging in via mobile, up from 38 per cent in October 2013, the network could soon see a majority of its traffic coming via mobile, according to  techcrunch.com

Ramachandra Guha
@Ram_Guha
Historian  and columnist
Is it fair to conclude from the PRS data that Somnath Chatterjee was a better Speaker than Meira Kumar, or would he have been as helpless?