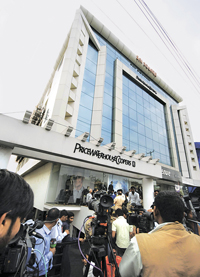 It seems the year 2009 would be rated as one of the toughest years for PricewaterhouseCoopers (PwC) in India. For PwC, the year opened with its involvement in the biggest corporate fraud of the country at Satyam Computers. And it has ended with  the resignation of the company’s executive director and head of the taxation wing Dinesh Kanabar.

This troubled story for them might not end here. Market insiders believe that the exit of Kanabar, along with 20 other colleagues, could also snowball into shifting of the clients they were handling. Though clients  have not announced any shift as yet, once Kanabar joins KPMG — he is expected to join the rival accounting firm in February 2010 — these developments could take place.
When contacted by BW, the official spokesperson of PwC said: “We are the leading tax practice in the country. Besides Indian companies, the PwC network services a number of global clients, many of whom have presence in India. We have a loyal client base and our commitment to delivering quality work and the highest standards of service is appreciated by our clients.” However, sources told BW that Kanabar and his team have been working  with several  corporate houses for many years, and the movement of PwC’s client base is just a matter of time.
This is seen as a major setback for PwC India chief Gautam Bannerjee’s India plans. Bannerjee recently joined the firm’s Indian chapter, after Ramesh Rajan quit the office nearly a month ago. This is what Bannerjee said in his address to his employees: “It is the personal aspirations of one or two partners that has resulted in these resignations.” His disappointment is pretty evident in his address.
Bannerjee did not respond to BW's calls or e-mails.
Kanabar, on his part, is keeping all his cards close to his chest. “I am not in a position to speak much on the issue. Once I officially join KPMG, I will respond to every query. I am in the notice period.”
Perhaps, what would hurt PwC most is that he has taken his entire team, who came along with him when RSM Consultants sold their taxation business to PwC in early 2007.
From the erstwhile team, only Ketan Dalal is staying back, whereas Sachin Menon, Hiten Kotak, Rajesh Dhume, Kishan Malhotra, Girish Mistry, Tushar Sachdev and Punit Shah will be moving to KPMG. Market insiders have told BW that Dinesh has been offered the post of deputy CEO at KPMG and would report directly to CEO Russell Pereira.
Dalal, along with Shyamal Mukherjee, has been asked to take care of the taxation wing. However, the spokesperson at PwC did not comment on the issue. “It is a personal decision of those who have resigned. It would not be appropriate for us to comment on it.”
Sources also told BW that Bannerjee has told the core group comprising Mukherjee and Dalal to speak to all clients whose accounts were handled by the previous team and assure them about  retaining business.
The other trouble for PwC is that its taxation wing is now emaciated.
However, the PwC spokesperson downplayed this  saying that PwC is a leading tax practice firm in India with over 1,200 tax professionals and 55 executive directors, servicing premier domestic and international companies and such exits will not affect the company. “Occasionally, people leave and of course new people join,” he said.
He added that the impact of these executive directors leaving the company would be minimal.
(This story was published in Businessworld Issue Dated 11-01-2010)
Tags assigned to this article:
magazine kpmg pwc satyam