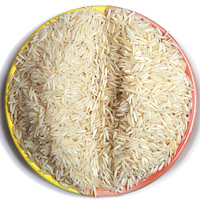 The Middle East and Europe are huge markets for traditional Basmati — the Indian and Pakistani diaspora, and the Arabs are committed consumers. There are hopes of new converts in Iran, Iraq, the US, Australia and South-East Asia. "We are sure that we have a great supply chain. We will keep our eyes open for newer markets," says Karan A. Chanana, group managing director, Amira Foods. Five years ago, Amira Foods had revenues of Rs 360 crore with sales of variants of rice; it has grown to Rs 1,080 crore on the back of Pusa 1121. "There is huge demand from restaurants and caterers in the US and Canada because it is cheaper, of the same quality and has a larger grain," he adds.

A few agri-economists have aired the view that prices will fall on the back of better yields in 2011-12. But exporters believe there is enough demand to absorb 20-25 per cent more by way of additional produce. At present, exporters buy Pusa 1121 at Rs 25-27 per kg on par with other traditional Basmati varieties. Farmers got Rs 30-35 per kg in 2009; last year, despite speculations of oversupply, they got more than Rs 30 per kg.

"As the yield per acre is higher than traditional Basmati, the farmer will still benefit," says Ahuja of Zamindara Farm Solutions. The problem, Setia notes "is the trading mechanism". His association has made a representation to the Ministry of Commerce to do away with the dealers' system. It is a system where dealers buy directly from farmers, clean the grains, do neutral packing and export it. But consumer would not know where the grain was procured from. Ahuja feels exporters need to be motivated to switch over to simpler trading routes like letters of credit and cash against documents from banks.

What Rice Is It Anyway?
The Ministry of Commerce recognised Pusa 1121 as a Basmati variety in 2008. But Europe feels it is not from the traditional Basmati family. It is keen to bring in any variant under the definition of Basmati as per its globally accepted Geographical Indications (GI). The Indian Agriculture Research Institute (IARI) does not buy this argument. The Iranians, too, had their objections, but have come around.

break-page-break
Pusa 1121 has longer, thicker grain, but is not aromatic. The traditional Basmati grain length is 7.25 mm; it expands to roughly 15 mm when cooked; its new avatar is 8 mm long and expands to more than 17-18 mm.

Of course, the IARI is busy with a Pusa 6 variety, which it hopes will improve yields by more than 25 per cent and be aromatic as well. But that is for another season. For now Europe does not allow genetically modified foods; it suspects Pusa 1121 to be one. "It (Europe) is a huge market for us, and for other exporters. We are trying to explain our position to the authorities," says Gurnam Arora, joint managing director at Kohinoor Foods. Setia, and his association, have asked the Ministry of External Affairs to take up the matter with the Europeans.

You have to contend with Pakistan, too. "Our first priority is to tackle the infringement done by Pakistanis," says a leading exporter who does not want to be named. "The Pakistanis are loaded with similar seeds and would eat away our business." Indian exporters fear Pakistani rivals have copied Pusa 1121 and now have a Version 2: Kiyanat 1121. IARI sources told BW that the agriculture ministry has already started the process to patent Pusa 1121. "We are taking legal opinion on this. We might not go in for a GI for this as we have recognised it as Basmati variety, but it is a fit case for a patent," says a senior official.

"They (Pakistani exporters) are smart. They are mostly marketing via open source," asserts Setia. Open source is neutral packing, where it does not bear the name and address of suppliers. Chanana of Amira Foods feels Indian exporters need not worry as Kiyanat is inferior to Pusa 1121. "The grain is much weaker, and would not be able to hold the market for long." But as Arora of Kohinoor Foods notes, the Pakistanis are pushing in newer varieties, and "this would only increase competition".

It is worth breaking bread over Basmati. Sorry Pusa 1121.