What an exciting combination: Arjun Kapoor on 'Adipurush' team

What an exciting combination: Arjun Kapoor on 'Adipurush' team

New Delhi [India], August 18 (ANI): Bollywood actor Arjun Kapoor on Tuesday shared his excitement and extended good wishes to the team of 'Adipurush' -- an upcoming 3D feature film starring Prabhas.
The 'Bahubali' star will be directed by 'Tanhaji: The Unsung Warrior' filmmaker Om Raut. An adaptation of the Indian epic that revolves around the triumph of good over evil, the movie will be shot in Hindi and Telugu and it will be dubbed in Tamil, Malayalam, Kannada, and several other foreign languages.
Upon the news of the forthcoming flick, Kapoor hopped onto the Instagram stories and wrote: "What an exciting combination this is ..Prabhas, Om Raut, Bhushan Kumar"
The 35-year-old actor extended his good wishes to the team as he shared the official poster of the movie, which was dropped today. 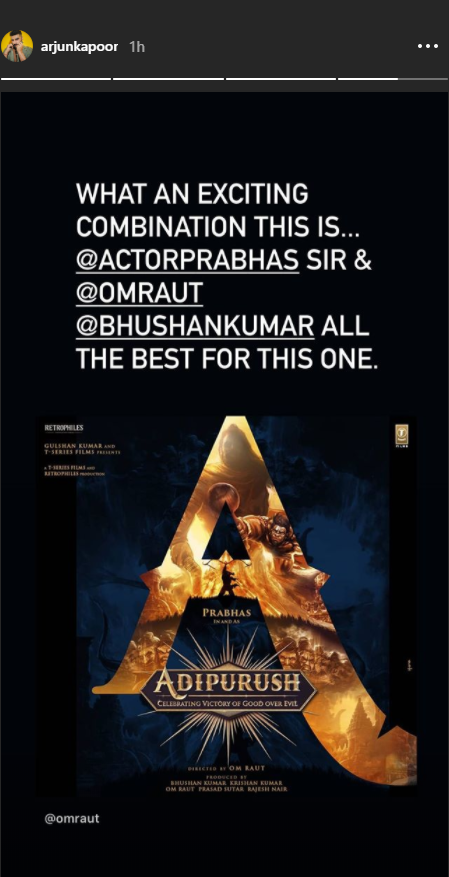 The makers are planning to rope in one of Bollywood's biggest names to essay the role of an antagonist in the film. An announcement in this regard will be made soon.
After 'Saaho' and 'Radhe Shyam,' 'Adipurush' is Kumar's third project with Prabhas. The project will also see the 'Saaho' actor and Raut teaming up for the first time.
The film, produced by Bhushan Kumar, Krishan Kumar, Om Raut, Prasad Sutar and Rajesh Nair, is currently in the pre-production stage and is expected to go on floors in 2021. (ANI)