What Works In India 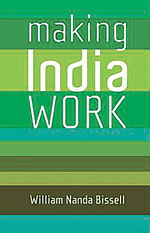 If khadi represents the Gandhian economy, the brand value of desi couture Fabindia is a great leveller. A block-printed handloom kurta is the natural choice for St Stephen's-educated politicians, JNU activists and writer-journalists, some of whom are expatriates living in this country. And when William Nanda Bissell, managing director of this popular chain, which works with over 40,000 craftsmen, writes Making India Work, we listen.

The success of designer handloom is proof that development can be made sustainable in a developing country. Bissell, who has a good overview of the rural and urban markets, rues India is fast going towards the crony capitalism of most developing countries, and losing out on the bigger picture of an equitable economic development. He is concerned at the growing chasm between the rich and the poor, and blames the rising poverty on India's ruling elite, who have "mastered the fine art of winning elections", but have not comprehended the true meaning of governance.

Bissell, unlike many other authors, offers certain alternatives solutions. He advocates self- sufficiency and inclusive growth as a balm to the global market-driven growth. How is this different from the socialist solutions of the past? By firstly acknowledging that India is not a poor country, but a poorly managed one, he makes his case for proper distribution of wealth and taxes and appropriate utilisation of land as also urban planning. But land acquisition activists might not take to his solution of "within the habitat area, there would be no zoning. No distinction would be made between land used for agriculture, residences, industries…"

Bissell calls for preserving the Indian quality of life, with greater adherence to the environment, suggesting a paradigm shift — should one say — in radically moving towards high thinking and ‘waste-not, want-not' sustainable living.

Contemporary India is more staid. It has  elaborately researched essays that would interest academicians more than the common man. The term ‘contemporary' covers the post-colonial scenario in which the same contradictions thrive. The richest and the poor share the same physical space, while regional histories and diverse sub-groups jostle for the common cultural and intellectual space.

The essays within the ambit of society reflects on the changing social structures, the "explosion" of the middles class and social movements such as dalit, environment (Chipko), which is clubbed with mass media. Politics include nature and functioning of democracy, the parliamentary system, democratic decentralisation and Panchayati Raj and India in the context of global strategic environment.

That is quite a handful of topics. To know some of the changes that have occurred over the past 60 years or so, this is a fine references book, but do not look for any answers here. They are, in a way, an affirmation and enhancement of things you may already know.