What Iran-West Pact Means For Its Neighbours & India 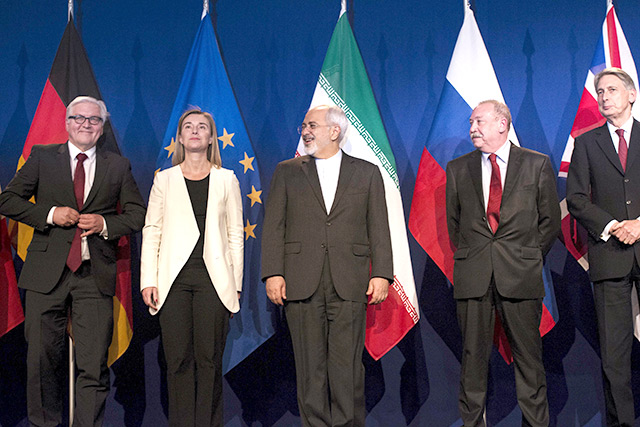 06 April, 2015
Print this article Font size -16+
India on Friday (3 April) welcomed the understanding reached between Iran and the six world powers on Tehran’s contentious nuclear programme and hoped that this would lead to a comprehensive agreement by June 30.
“A significant step seems to have been taken with agreement on the parameters of a comprehensive settlement to be negotiated by June 30,” External Affairs Ministry said in statement, welcoming the understanding announced in Lausanne between Iran and the P5+1 group on the nuclear issue.
Iran and Western powers have agreed on the framework of a potentially historic deal aimed at curbing Tehran's nuclear drive after marathon talks in Switzerland. It marks a major breakthrough in a 12-year standoff between Iran and the West, which has long feared Tehran wants to build a nuclear bomb.  Iranians celebrated in the streets after negotiators reached a framework for a nuclear deal that could bring their country in from the cold, hailed by U.S. President Barack Obama as an "historic understanding" with an old adversary.
Frozen out of the international banking system, its foreign trade slashed by the sanctions, Iran looks likely to become the biggest country to rejoin the global economy since post-Communist eastern Europe in the early 1990s. The boost to Iranian production from easier trade would quickly spur the economy, even if big foreign investment deals took longer to arrange.
"Iranian industry is currently operating at about 60 to 70 per cent capacity. Thirty percent is idle - that's because of the sanctions. Getting this working again is the low-hanging fruit of lifting the sanctions."
The economic benefits would extend across the Gulf, particularly to Dubai, which is a traditional hub for business with Iran and has a large Iranian community. The sanctions slashed Dubai's trade with Iran by more than a third; the emirate could now become a jumping-off point for foreign companies going back into Iran.
The resulting boom could create tens of billions of dollars worth of business for both local and foreign companies and shift the economic balance in the Gulf, which has so far been heavily weighted towards the rich Gulf Arab oil exporting countries.
However, all the points in the deal cannot be ticked before next year. The delayed impact may be quietly welcome news for Saudi Arabia, Iraq and others in the Organization of the Petroleum Exporting Countries (OPEC), who had feared that a rapid rebound in Iranian output could pile more pressure on oil prices that have halved since last summer due to a global glut.
Impact On India
The impact of the deal will be mostly positive for India though there may be some not so positive fallout as well.
Even if oil does not slump, the deal will ensure that oil prices remain subdued - helping to keep India's inflation remain subdued as well. The Economic Survey (2015) estimates that a $1-a-barrel fall in international crude oil prices is likely to reduce India’s net import bill by $0.9 billion a year.
Lower inflation will ensure that the Indian central bank cuts interest rates again in Q2'15, and this will be a positive for the Indian infrastructure sector.
Some of the struck projects could get a legup. For example, the Farzad-B gas field in the Persian Gulf. This field was discovered by ONGC Videsh Limited in 2008 but India has since not pursued the project aggressively due to US sanctions against Iran. It is estimated that the gas field holds gas reserves of 21.68 trillion cubic feet (tcf), of which 12.8 tcf are recoverable. The reserves of Farzad-B are said to be almost thrice of the largest gas field in India.
However, India may have to balance its ties with Iran and Israel. The Modi led government has been more forthcoming about its relations with Israel than its predecessors. Last night’s agreement has been described as a ‘historic mistake’ by Israel.
Tags assigned to this article:
energy and power nuclear power barack obama opec iran john kerry othertop2 syed akbaruddin nuclear pact