What I Learnt At B-School 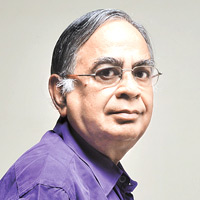 An interesting aspect of our course was the amalgam of faculty representing three different strands. We had American professors, MIT-bred or otherwise, rubbing shoulders with non-resident Indian faculty from well-known North American and European universities, and some prominent industry professionals. This was an awesome team in terms of scholastic expertise and industry experience. But it also left the students somewhat confused and disoriented. Different styles, accents, pedagogy and world views posed a major intellectual challenge in comprehension and assimilation. In hindsight, we had brilliant minds offering us peeks into a world of ideas that were, in a standalone sense, extremely appealing but did not gel into a comprehensive learning paradigm. The academic freedom made the PGP programme a disparate set of brilliant inputs without a cohesive overall learning ideology. Paradoxically, this was believed to be IIMC's "strength". It apparently helped "adult" students create their own internal "learning" templates, which were then fleshed out by faculty inputs, selected and sifted by the student learner. Barring an underlying emphasis on use of quantitative tools for managerial decision-making (the hallmark of the "MIT Brand"), we, as students, were mostly left to our own intellectual devices to make sense of the diverse inputs. This approach fitted with the assumed "adulthood" of the student, who would manage her own learning and look upon faculty as a facilitator or mentor.

So, to sum up, I learnt and appreciated the value of "open discourse" and a spirit of inquiry. In addition to taking home a bag of "management tools", I also took away a perspective on how one should look at problems, develop an analytical orientation, take responsibility for one's own learning and believe that good "theory" must drive practice. An excellent academic institution inculcates a lifelong love for "learning" and for this I am indebted to IIM Calcutta.

The author is retired professor of marketing, IIM, Calcutta