Crisil Research expects an overall 5-6 per cent growth in farm output, including a 2-3 per cent rise in the sowing area at 109 million hectares for kharif season 2020. 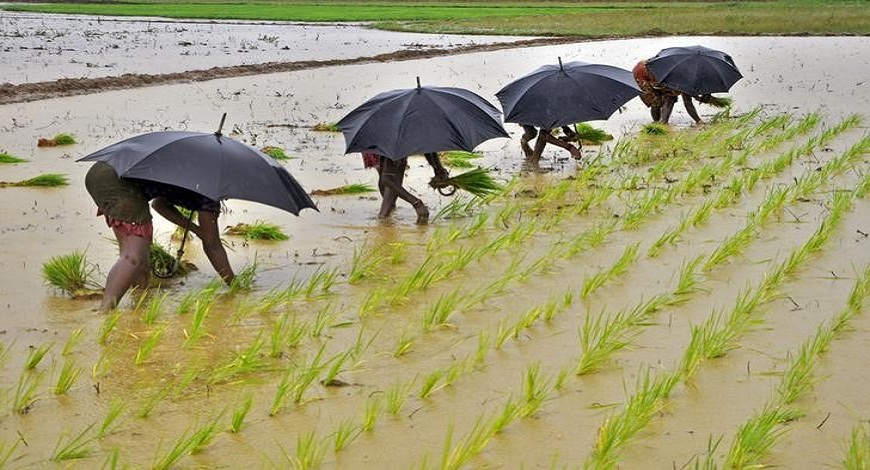 The overall kharif crop output is expected to increase 5-6 per cent this year mainly driven by higher crop acreage and productivity following a well-spread monsoon across the country, according to a report.

As on August 21, rains were 7 per cent above the long-period average and this good spatial and temporal distribution has led to sowing across crops in most states, Crisil Research said in a report.

Crisil Research expects an overall 5-6 per cent growth in farm output, including a 2-3 per cent rise in the sowing area at 109 million hectares for kharif season 2020.

The productivity will also increase by 2-3 per cent resulting in bumper khariff output, it added.

Further, the report said the paddy cultivation is set to increase because of both rains and reverse migration of labour to the eastern and southern states.

'Due to migration of labourers, many farmers in Punjab and Haryana are going for direct sowing of paddy which has less productivity,' Crisil Research Director Hetal Gandhi said at a webinar on Monday.

He, however, added that this is being more than compensated by growth in area under paddy in states like Uttar Pradesh, Bihar and Andhra Pradesh where the labourers have gone back to. 'This will increase the overall paddy output from last year.' The eastern states could see the highest growth in crop profitability because of a low base, she said adding that southern and western states will bear the brunt of lower cotton and maize prices.

North will be the most profitable in the kharif season 2020 owing to a favourable crop mix and higher government procurement, she said.

However, the area under vegetables, cotton and maize would be lower than in the previous season as declining prices have discouraged farmers from sowing them, the report said.

Coronavirus-related supply disruptions have made farmers move away from highly perishable horticulture produce like tomatoes to less perishable crops like okra and brinjal, she said.

Further, Gandhi said that such a bumper kharif harvest would put downward pressure on prices of various commodities, it said.

However, the government support to paddy procurement (the most critical crop in terms of farm income, given it accounts for 30 per cent of food grains production), incremental sowing of more remunerative crops and improved productivity on-year will boost profitability at an aggregate level, the report said.

Farm profit per hectare for field and horticulture crops is expected to increase 3-5 per cent in the kharif season 2020, supported by higher crop acreage, expected improvement in productivity, and the government support to procurement at minimum support price (MSP), the report opined.

'We foresee an upward bias for paddy prices and profitability, supported by a 3 per cent increase in MSP. Also, an increase in state-advised price for sugarcane will boost profitability on-year.

'Among horticulture crops, apple is expected to witness higher profitability on-year because of improved yield over a low base of 2019 and also on account of anticipated increase in prices,' Gandhi said.

In contrast, weak domestic and international demand will keep cotton and maize prices under pressure, she added.