Weeding Out The Inactive 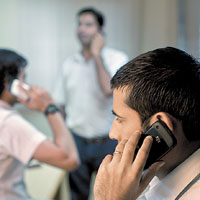 08 November, 2014
Print this article Font size -16+
It’s clean-up time. After an uninterrupted run since mobile services began in the mid-90s, five operators-Reliance Communications (down 20.48 million), Tata Teleservices (2.41 million), Uninor (1.08 million), MTNL and Loop (0.15 million each)-together lost 24.7 million subscribers. During the same period, seven other operators, including Bharti Airtel, Vodafone, BSNL and Idea Cellular, added 4.1 million subscribers. In effect, the subscriber base fell by 20.6 million. Thanks to the fall in subscribers during the month, the total teledensity decreased to 77.79 per cent from 79.58 per cent in June.

In August, the association of GSM operators, the Cellular Operators Association of India (COAI), saw its subscriber base fall by 7.1 million to 671.95 million. Uninor’s base was down another 2.38 million. Large operators, including Bharti Airtel (down 1.9 million), Idea Cellular (1.65 million) and Vodafone (1.56 million) also reported a fall in subscribers.

While some operators have disconnected inactive subscribers, the Department of Telecommunications (DoT) has told operators that it will not release new number series unless operators deactivate subscribers who do not use their connections for 60 days. This is the prime reason for the fall in subscriber numbers.

The fall in subscribers is not necessarily a bad thing as the active user base in July rose to 698 million (76.42 per cent of a total of 913.49 million) from June’s 695.8 million. Active subscribers are calculated on the basis of  VLR (Visitor Location Register) data. VLR is a temporary database of subscribers who have roamed into a particular area which an operator serves. According to the latest Telecom Regulatory Authority of India numbers, Idea Cellular has the highest VLR at 92.8 per cent, followed by Bharti Airtel (90.46 per cent).

The VLR number falls when subscribers have multiple SIMs. Since subscribers use different SIMs for different services, there is a shortage of numbers and consequent increase in the load on the network. So, operators with lower VLR could see further cuts in their subscriber base. A CFO of a leading telecom operator sums it up by saying: "Today, I hardly know who my subscriber is."

The fall in subscriber base is also because the telecom sector seems to be slowing down. Says Rajan Mathews, director-general, COAI: “Earlier, even if some subscribers pulled out, the sheer volume of growth ensured that the subscriber base grew. That's not valid any longer.” Besides, subscriber base is no longer the key metric. Till recently, operators got additional spectrum based on their rising subscriber base. With the government clearly decided on auctioning spectrum, it is not necessary for operators to show an inflated subscriber base anymore. Operators have already deactivated lifetime mobile subscribers who do not use their connections for three months. In case the phone is not used for six months, the number is allotted to another subscriber.