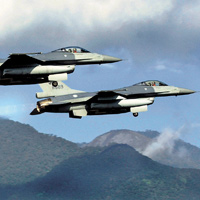 While the focus of the defence aspect during US President Barack Obama's visit is on what India can buy from the US, it is also time to push for access to the huge US market for India's defence equipment manufacturers. With Indian corporate entities such as the Tata Group, Mahindra & Mahindra and Ashok Leyland, among others, getting into defence technology, the opportunity is definitely there.

"We want the US to buy from us as part of their supply chain," says Brigadier K.A. Hai, CEO of Mahindra Defence Systems, adding that the market for Indian weapons exports need not be restricted to the US. The Mahindras have a joint venture with UK-based BAE Systems called Defence Land Systems India, which builds combat vehicles for the Indian army.

The US's defence market stands at a humungous $700 billion, and the defence procurement market — what the US government buys in a year for defence purposes — is an impressive $140 billion. There is also a $280-billion maintenance and aftersales market that Indian companies are looking to penetrate. Indian companies would provide technology solutions such as back-up navigation systems, simulators, mine-protected vehicles and engineering vehicles. Entry into the US for Indian defence companies will also open the doors for supply of equipment to the US's allies, which is a sizeable market as well.

Analysts, however, say it will not be easy going because the US's national security is governed by the International Traffic in Arms Regulations (ITAR), which prevents US companies from seeking out partnerships for importing weapons or weapons systems into the US. ITAR regulates all defence-related imports, exports and partnerships in the US by any company or individual. No matter what comes out of the talks with Obama, it might prove very difficult to penetrate ITAR. Besides, most weapons research and development is commissioned (and funded) by the US government to private companies such as Lockheed Martin and Boeing. Analysts say that by doing so, ITAR offsets any foreign participation in defence-related activity.

Pushing to gain entry into the US market is, apart from the Mahindras, Ashok Leyland. It has entered into a partnership with South Africa-based Paramount for developing an armoured truck called the Stallion, and is in the process of developing mine-protected trucks for the Indian army. However, Tata Motors, the biggest private defence equipment supplier to the Indian armed forces, is not in formal talks with any US company, according to a company spokesperson. The company has till date supplied 123,000 vehicles to the Indian military and paramilitary forces, including specialist vehicles such as light-armoured carriers. Tata Motors has also developed the 6X6 and 8X8 high-mobility vehicles, especially designed to carry missiles and their fire control stations.

In terms of technology exchange with the US, current Indian defence players such as BEML, HAL and DRDO would certainly benefit, but there are riders. Analysts say if India does not sign two agreements — the Communications Interoperability and Security Memorandum of Agreement and the Logistics Support Agreement (where India could be a potential US base) — the technology tie-ups could be shelved again.