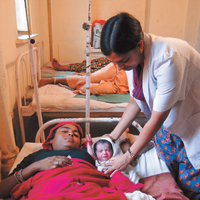 The community health centre (CHC) in the small town of Chomu, near Jaipur, is cited as a model unit of the government healthcare system, which has seen a structural shift through the Rs 14,127-crore National Rural Health Mission (NRHM). As the eye wanders from the rats trotting along the walls to the stray dogs fighting over a discarded milk can by the bed of a woman and her newly born, among a rattle of patients and health workers, you may think the bar could have been set higher.

The doctor in charge of the centre, C.M. Chopra, is sitting in a small, crowded room, surrounded by about 20 patients. Chopra checks the pulse of these patients one by one as they take turns on a chair by his desk. The doctor explains that he has already seen 150 patients that day. It is 11 am.

Patients suffer from ailments ranging from diarrhoea, malaria to tuberculosis (TB). TB, he says, is his biggest concern. "Even if patients are diagnosed here, you need to ensure they follow the six-month treatment." Otherwise, not only do they develop a drug-resistant form of TB that is difficult to cure, but they also pass on the deadly disease to others. "I know that if I default on one, I am killing many others," he says with an anxious smile. So, Chopra travels twice a week to the 15 primary health centres (PHCs) that fall under the Chomu CHC to ensure medicines reach patients in villages over 50 km away. But his efforts mostly go in vain. Not everybody is as committed as Chopra. Many PHCs do not have doctors, and sub-centres are often not functional.

Hospitalising patients at the CHC is not an option either. At Chomu, the medical staff delivers about 50 babies every day at a centre that has only 30 beds. The single ward is always occupied by women and their newborns. The reason is clear: under NRHM every woman who comes to a centre for delivery is given a cheque of Rs 1,700 directly drawn from the district's chief medical and health officer's (CMHO) account. The patients are brought in by an accredited social health activist (ASHA), who receives a cheque for Rs 500 (including Rs 300 for the travel).

Although NRHM — rolled out in 2005 — has revolutionised woman and infant treatment in the state, it has created another problem: it crowds out other patients. "I don't want more money," says Chopra, "I need a new building, more beds, and more doctors." In fact, CHCs are not supposed to handle so many deliveries, but NRHM has failed to strengthen PHCs and sub-centres and so the pressure on CHCs.

Matasula. About 50 km from Chomu is Matasula, a village in Jaipur district, where 48-year-old Santhamma, an auxiliary nurse midwife (ANM) — on the state's payroll — runs a sub-centre that caters to about 4,000 people. She asks us to tread carefully as we walk through the patchy garden leading to the centre. "People come here to defecate," she says.

The visit is short. The sub-centre is a small, dusty room with no electricity and water, let alone medicines. Although NRHM is supposed to provide a second ANM to every sub-centre, Santhamma says the elusive nurse never surfaced. Of the five villages that come under the centre, only two have ASHAs. The sarpanch (village head), who appoints ASHAs, asks for money, says Santhamma.

Moreover, each sub-centre is supposed to receive Rs 10,000 every year under NRHM.  But Santhamma says she has received only Rs 20,000 in four years and has used the money to buy furniture for the centre — an old cupboard, a small desk and two plastic chairs. She must have got a raw deal.

Jhunjhunu. This practice is common, says Rajan Choudhary, who runs a small non-government organisation in Rajasthan's Jhunjhunu district. "Doctors often claim money for official purpose, but it mostly goes into their own pockets," he says.

Also, the money given to the Village Health and Sanitation Committee by CMHO often lies idle in bank accounts. "The village sarpanch usually has no idea of the existence of such an account, or he is too afraid to use it thinking he would get into trouble," says Choudhary.

Raisar. In Matasula, villagers have to travel to Raisar, a small town about 10 km away, to get medical treatment. Dr V.K. Tiwari, who runs the PHC in Raisar — all by himself — is examining Suraj, a small child suffering from high fever and vomiting, as we walk in. The doctor quickly moves to the next patient, a young woman wearing a bright sari and a gold nose ring, complaining of body pain. While walking out of the centre, we see the doctor leading her into his private quarters. "A lot of things go on at this centre," says a nurse, as the doctor locks the door.

Jamwa Ramgarh. This PHC, like many others, cannot admit pregnant women. For delivery, women travel to Jamwa Ramgarh town, which is about 20 km away. The CHC at Jamwa Ramgarh is rather deserted. A few patients in bandages are lying around, smoking bidis. In the ward, about 20 women are lying on blood-stained beds with their newborns. There is just one nurse, who has delivered 15 babies that day.

A passer-by tells us that we will find one of the hospital's doctors in a nearby building. Just a few metres away, the doctor, a gynaecologist, is running her own private practice, while a single nurse is battling alone with an army of patients at the CHC. "The doctor in charge is out of town," she says. "So, this is your private practice?" we ask her.

"Yes, this is my home," she replies, unfazed.

Dausa. More than 20 km away, the Dausa district hospital's staff is more welcoming. As patients walk in and out of his office, Dr S.K. Sharma, the hospital's principal medical officer, explains that NRHM gives them untied funds and has provided 21 nursing staff. But the hospital has no surgeon. That means for an operation as simple as getting your appendix removed, you will have to travel to Jaipur.

But Sharma takes it philosophically. "We used to have a very, very big surgeon," he says, before adding with a laugh: "At least 125 kg!" The hospital desperately needs more doctors for other specialties, but even if NRHM is ready to foot the bill, the state has not sanctioned the positions.

While NRHM has improved woman and infant care, it has not been able to strengthen district and village health centres. It has taken steps to address governance issues by posting accountants in CHCs, but it needs to do more. Armchair arguments that spending on such ‘populist schemes' is wasteful expenditure just does not wash, as any cursory visit to a PHC will tell you. For every 10 babus, who swindle money from such largesse, there are at least two committed health workers who bank on this government stimulus to carry on their work.

Its ambitions to become a global superpower notwithstanding, the Indian government spends a paltry 0.9 per cent of its gross domestic product on healthcare — less than Bangladesh's 1.1 per cent. India definitely can afford to spend more, and it should.