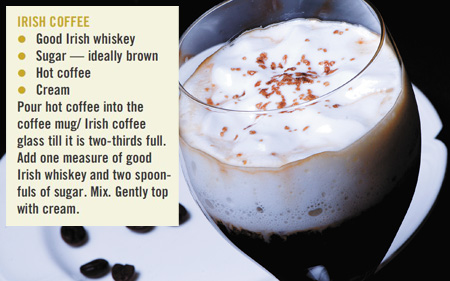 08 November, 2014
Print this article Font size -16+
An old friend complained the other day that his regular tippling station didn't bother to change anything in its cocktail menu when winter set in. "They offer precisely the same cocktails you have in summers, only with less ice in them," he said.

I advised him to change his bar. Good bars should offer hot cocktails meant specifically for the cold months. There are plenty of them out there, and some are very simple and classic drinks. Some of these classic cocktails — Irish Coffee, for example — are best had in a bar with a great bartender and all the right ingredients in hand. Others, such as the infinite variations of the classic hot toddy recipe, can be enjoyed perfectly at home itself, provided you have the basics in your bar and kitchen.

The great thing about cocktails in general — and winter cocktails in particular — is that no two people can mix exactly the same drink, even if they are following the basic recipes. Minor changes in quality of ingredients, in choice of liquor, or even something as simple as changing the market from where you pick up your clove stick or lemons, can bring about striking changes to the taste of the cocktail.

My friend and I sat and compiled a list of four old time classics that should be available at all good bars during winters. This was what we came up with. Most of them have fairly simple ingredients — good whiskey, rum or brandy, hot coffee and tea, lime or lemon, cloves, cinnamon. Many of them are fairly simple to mix in your own homes.

The Irish Coffee Legend has it that Irish Coffee was invented when an Irish bartender, Joseph Sheridan offered a group of cold, American travellers a coffee mixed with whiskey in the Port of Foyne in the 1940s. When they asked what kind of coffee they were drinking, he is supposed to have replied "Irish Coffee". While this may or may not be a true story, the Irish Coffee is a great drink for the winters because it warms you up in an instant. The ingredients are quite simple — good Irish Whiskey, good hot coffee, brown sugar ideally and thick white cream. The complications arise because Irish Whiskey brands (Jamesons or Bushmills, for instance) are not as popular or easily available as good Scotch brands in India. That apart, the quality of whiskey, coffee and cream completely change the taste of the final product. You will get one kind of taste if you use an Irish single malt of the first quality with a great Columbian or Costa Rican coffee. You will get a completely different taste with an instant coffee mixed with blended whiskey. The recipe requires you to have hot black coffee, mix it with one or two spoons of brown sugar, pour one large measure of good whiskey and mix the whole thing in a coffee glass until the sugar dissolves. And then to gently top the drink with cream. Most bars use whipped cream though the original recipe apparently called for unwhipped cream.
The Hot Toddy If you are more fond of tea than coffee, this will be more to your taste. The toddy generally uses a mix of hot tea with honey, lemon and a good liquor — whether whiskey, brandy or rum is up to you. To make the classic hot toddy, you pour honey to the bottom of a mug, coating it properly. Add a dash of lemon juice. Then pour whiskey or rum or brandy, two measures. Finally, fill the glass with hot tea and stir properly. An uncle who loved hot toddy used to swear that unless you used fine Darjeeling tea, the toddy just didn't taste right. He also skipped the lemon juice in favour of a lemon slice as garnishing. A cantonment club in north India, which served great variations of hot toddy to its patrons, used cinnamon sticks and cloves to change the flavouring just a bit. It also preferred using brandy as the alcohol of choice though it would make you a rum or whiskey if you wanted one. At home, I prefer to use a dark rum, lots of honey, and only a wee bit of lemon juice. I use Earl Grey as the tea when I can, though I have made toddy with every kind of tea including robust CTCs, though that tends to overpower the taste.

Hot Buttered Rum I haven't been to too many bars offering this actively, but in the old days it was a great favourite in many cantonment clubs, and army homes. To make a hot buttered rum, you need to have non-salted butter, preferably. You put a small pat of white butter at the bottom of a glass, put a little bit of sugar, brown or white doesn't matter, and a pinch of ground cloves or cinnamon or both. You need dark rum for this because it just doesn't seem right with light rums. Pour one ounce of rum on the butter, sugar, spice mixture and then pour boiling hot water and stir. A friend told me about using vanilla extract to give an extra flavour to the drink but I have never tried it myself.

The Grog if you plan to sit down and watch a rerun of Captain Jack Sparrow's adventures, this should be the drink of choice for you. The grog was a drink invented for the sea — and apparently a great favourite of both navies and pirates. The grog is actually nothing more than hot water and rum, with a little bit of sugar or honey thrown in for taste and a dash of lemon added to give an extra zest. There are too many stories about grog to be recounted here. One story goes that grog was invented when a ship ran low on its rum stores and the admiral commanding it ordered the remaining rum to be diluted with water and served to the crew. The crew grumbled that this was not a real drink, but had no choice. They called it grog for some reason and the admiral was nicknamed Old Grog. There are other variations of the classic drink, such as the hot apple cider grog (you substitute the hot water with hot apple cider. You can get apple cider easily in Himachal Pradesh) and Eggnog Grog (you stir eggs, milk, sugar, pinch of salt, stirring continuously till it becomes an even mixture and then pour it over rum or whiskey). However, both of them are best had only if you are being served by a good bartender.