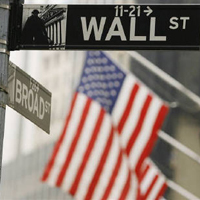 08 November, 2014
Print this article Font size -16+
Wall Street just went through its weakest three-week period since November, not to mention a panicky spell when the Nasdaq stock market ground to a halt. But that doesn't mean the pain is over.

Next week is unlikely to bring much clarity to the primary issue facing markets: when and by how much will the US Federal Reserve slow its accommodative monetary policy. Uncertainty, along with what is expected to be anemic trading heading into the Labor Day holiday on September 2, could make for a volatile week.

"We're cautious about the next few weeks, so we're taking gains now," said Michael Mullaney, who helps oversee about $9.5 billion as chief investment officer at Fiduciary Trust Co in Boston. "It's not like we're on the precipice of recession, but there's not much for investors to get excited about and we're expecting volatility to pick up."

Traders had hoped that the Fed's meeting minutes issued on Wednesday would provide direction about whether the Fed would begin to reduce its $85 billion-a-month of bond-buying in September. Instead, the minutes painted a mixed picture, with some members advocating patience.

The mixed signals create a double-edged sword. While the stimulus has fueled the market's solid gains in 2013, for the Fed to continue its cheap money policy would signal the economy is too weak to advance without intervention. The CBOE Volatility index, a measure of investor anxiety, is up 16.7 per cent over the past three weeks.

The Fed has said that the policy change depends on whether the economy meets growth targets, making markets even more sensitive than usual to financial data. Next week will see a report every day.

July durable goods orders are due on Monday while the final reading for the Thomson Reuters/University of Michigan consumer sentiment index will come on Friday. Perhaps the most important will be Thursday's latest estimate of U.S. gross domestic product for the second quarter. The data is expected to show the economy grew a revised 2.2 per cent annualized rate last quarter compared with a 1.7 per cent reading last month.

While a weak report would be a bearish sign for the economy, some analysts speculated that a strong reading could have negative implications for the market.

"If GDP comes in above 2.5 per cent, that could be problematic because it will suggest that the Fed could take a bigger bite out of stimulus than we are currently expecting," said Bruce Bittles, chief investment strategist at Robert W. Baird & Co in Nashville. "That would put the stock market in jeopardy."

"That should serve as pretty decent support," said Douglas DePietro, managing director at Evercore Partners in New York, adding that markets would be range-bound between that level and the S&P's all-time high of 1,709.67, reached earlier this month.

"We'll see a lot of listless trading until the September Fed meeting," he said. "We're in a bit of an information void until then. There aren't a lot of catalysts to look forward to and most of Wall Street is on holiday."

Daily trading volume has been among the lightest of the year in recent sessions, as is typical at this time of year. Light volume can amplify market moves, resulting in dramatic intraday swings.

Low volume was dramatically exacerbated on Thursday after a technical issue shut down trading on all Nasdaq issues, equivalent to $5.9 trillion in market capitalization, for more than three hours.

Friday (23 August) trading was smooth and the day's gains helped the S&P 500 and Nasdaq Composite end a two-week losing streak, but the Dow posted its third consecutive weekly decline.

Salesforce.com is also due to report, and investors will scour the results to see if the maker of online sales software can justify its outsized valuation. The stock has a P/E ratio of 99.47, compared with the 15.57 ratio of its peers.

Warnings for third-quarter US earnings are below second-quarter levels but are rising, Thomson Reuters data showed.

Negative outlooks are outpacing positive ones for the third quarter by 5.1 to 1, up from a little more than 4 to 1 a week ago. The negative-to-positive ratio for the second quarter was 6.3 to 1.

As a result, estimates for third-quarter earnings are down. Growth is estimated at 5.1 per cent from a year ago, down from a July 1 estimate of 8.5 per cent growth and close to second-quarter's growth of 4.8 per cent, with results in from most companies.