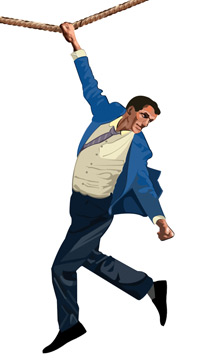 The Black Sheep
The 184 companies that underperformed the BSE 500 in the past 10 years have returned 258 per cent on an average. Of these, 27 companies, or 15 per cent, are in the textile sector. The worst among them have eroded investor wealth, giving negative returns in the 13-80 per cent range.

Another sector that has been disappointing is pharmaceuticals. With pharmaceuticals perceived to be a defensive sector (in the limelight only when the market turns bad), the bull run over many years saw the sector getting neglected. But that is not the only reason for the underperformance. In the early 2000s, pharmaceutical companies rallied on the back of copycat (generic) drugs and bulk drugs formulations. However, stringent regulation and the absence of any major discovery in the Indian generic space saw the companies lose traction.

Says Avinnash Gorakssakar, director, Moneyinvestments.in, a Mumbai-based investment advisory firm: "Ten years ago, cost of capital was high. Most of the companies that have underperformed also had huge debt. Apart from that, companies with conservative management have not fared well compared to peers because they lacked innovation and product differentiation. One good example would be TVS Motors and Ashok Leyland in the auto space; they lost out to Bajaj Auto and Tata Motors."

The effect of inactive managements can be seen especially in state-run companies such as MTNL, Shipping Corporation, National Aluminium, Oil and Natural Gas Corporation, and others. Gorakssakar goes a step further. He says companies with a global mindset have fared better than inward-looking competitors. For instance, Hindalco had been an underperformer over the past 10 years with a return of 184 per cent. But after acquiring Canada-based Novelis, more than half of Hindalco's earnings are independent of aluminium price volatility.

It is also true that what was bad yesterday does not have to be bad today. Hindustan Unilever (HUL) is a classic example. The stock's performance over a period of nine years has been a disaster. Governments bonds with a fixed 8 per cent return would have been better. But in the past year, it has gained 44 per cent. "Therefore, it becomes necessary to churn your portfolio. Today, a stock can be good, but with the fast changing global and domestic business environment, one has to see how it will be in future," says Singal of Emkay Global. He adds, "In the long term, equity as an asset class gives a consistent 20 per cent return, but not as a single stock."