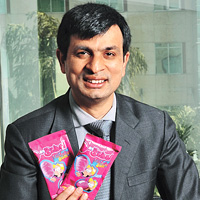 But as one Kraft Foods executive privately admits, "Will it be an easy game to beat Amul in cheese? They are completely backward-integrated. The ability and investment it takes to win in categories like these are questions," he says. And there are more Amuls being born. Till a couple of years ago, Parag Foods, which started off in 1992-93 with a farm in Manchar that now has about 3,600 Swiss cows, was content selling ghee (clarified butter), butter and gulab jamun mixes and so on, under a rather desi name, Gowardhan. Now, with the much younger and cooler brand Go, and with former Amul executives on its payrolls, Parag Foods has taken it upon itself to get Indian consumers differentiate the Cheddars from the Mozzarellas and the Goudas. "We are taking Indian consumers closer to a cheese connoisseur experience," says Akkara. It also claims to own the largest cheese production facility in Asia.

While Kraft may not be ‘officially' available in India, it still finds its way into large format outlets through imports. To compete with brands such as Kraft's Philadelphia and others such as Happy Cow, Go focuses on its packaging —  such as offering its cheese spreads in glass bottles instead of plastic tubs  that are commonplace. This also helps the brand sit pretty on large format store shelves next to the imports.

In the cheese slices segment, Go has launched an attack against Amul and Britannia by selling 12 slices in a pack when the competition sells 10.

Go is also actively trying to make cheese a part of the mainstream by providing consumers with different recipes using cheese. Kraft may not be looking at the cheese segment in India, but its competition is waiting. Kripalu says half-jokingly, "Once they are really tired of waiting for us, maybe then we would come in." Till then, Go goes for it.