Wait For That Real Bargain 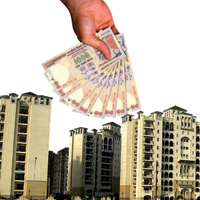 If a builder's marketing man tells you there are just two flats left in his project, and if you come back tomorrow that too would have gone, don't believe him. The truth probably is that he has sold just two flats so far. The marketing chap may use another ruse: the price is Rs 3,300 per sq. ft, but if you don't put your cheque down today, tomorrow prices will go up to Rs 3,500 per sq. ft. Again don't believe him.

As capital values of property decline and developers go on a desperate binge to launch new projects, those sitting on the sidelines might once again consider investing in a product that seems more affordable now. So is it a good time to invest in your first home, or maybe pick up something that could see some appreciation in days to come?

The answer: if you can wait, please do. Despite all the hype by builders that the property market has bottomed out, we actually are still to see the bottom of the trough. Crisil Research's recent 10-city survey predicts that residential property prices are likely to fall another 10 per cent by this October, and stability in prices and demand will only emerge in the first quarter of next year. This is backed by other agencies too. Builders such as Dharmesh Jain of Mumbai-based Nirmal Group put on a brave face and say there will be no more price decreases. But this must be discounted as marketing hype. Sandeep Sadh, CEO of the portal Mumbai Property Exchange, advises a wait-and-watch line as he feels the real reduction is yet to come. "Unless builders offer a substantial discount, the market will stagnate till October," says Sadh.

So when builders go to town again around Dussehra with their freebies and new offers, prices may be lower and it may be a good time to look around and make a deal. Again, the same flat you liked may come cheaper through a broker/investor who booked it earlier rather than through the builder. So look for bargains. For smaller metros such as Hyderabad and cities such as Kanpur and Jaipur that saw crazy appreciation of rates of 200 per cent or more in the 2006-08 period, it may be judicious to wait longer as these markets are today choked with an exceptionally large glut, and are likely to see huge, distress sales by developers.

Potential property investors must also be warned against the slew of new project launches that are being announced at attractive rates, 15-20 per cent below the prevailing market. The lollipop in these offers is that the booking amount asked for is just Rs 2-3 lakh for a Rs 25-50 lakh flat. The danger is that these projects that are yet to start are unlikely to be completed in the promised 30 months as thousands of customers in Gurgaon and Bangalore have discovered. The chances are your booking amount will be used to complete another project that is stuck for funds or clear an old debt of the builder. And your project may remain a flat football field for the next two years. A good example is DLF's maiden Bangalore project Western Heights. The company launched the project in May this year, but the Bangalore municipal corporation later came out with a public notice claiming DLF was selling flats illegally, and it had no clearances for its advertised 18-storey apartments.

Builders tend to hike prices as a project nears completion, but buying a home in a project that is three-to-six months from completion is a better bet than being stuck for years paying EMI for a home that is literally a mirage in the sky.

Unless it is need-based, investing in commercial or retail property is a no-no considering that even in the long-term — Crisil says weak demand and a supply glut will continue in this sector for the next two years — there is unlikely to be any appreciation in capital values, and lease rentals continue to fall.

(This story was published in Businessworld Issue Dated 27-07-2009)
Tags assigned to this article:
magazine infrastructure dlf emi how to invest in 200910 sandeep sadh mumbai property exchange