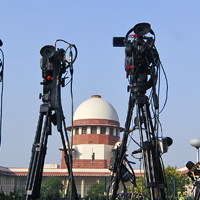 "The Governor has accepted the resignation and has informed the state government about it," the sources told PTI.

Ganguly had met the Governor at Raj Bhavan on Monday (6 January) after which the judge refused to comment on the matter.

The development came close on the heels of the Union Cabinet on Thursday last approving a proposal for sending a Presidential reference to the Supreme Court on the issue, which was seen as a step towards his removal as WBHRC chairman.

A three-judge Supreme Court panel had indicted Ganguly by holding that the statement of the intern, both written and oral, had prima facie disclosed "an act of unwelcome behaviour (unwelcome verbal/non-verbal conduct of sexual nature)" by the judge with her in the Le Meridien hotel room on December 24 last year.

Justice Ganguly has denied the allegations of the law intern and blamed "powerful interests" of trying to tarnish his image due to certain judgements delivered by him.