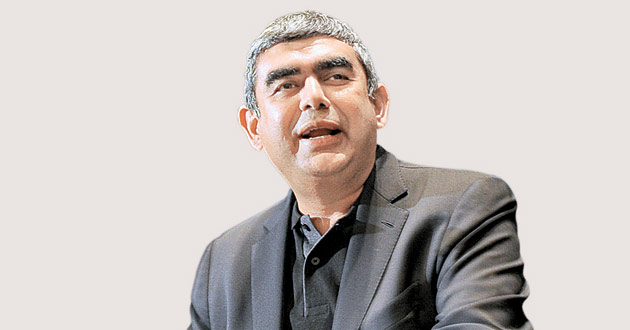 08 November, 2014
Print this article Font size -16+
He knows what it takes to keep the show going. New Infosys CEO Vishal Sikka has promoted 5,000 employees to stop them from leaving the software major. The company has sanctioned promotions for employees falling between level three — software programmers— and level five, senior management. It has

also given salary hikes of 6-7 per cent to employees in India and 1-2 per cent to those on site, effective 1 April. With this latest round of promotions, Infosys has promoted 15,000 employees in all since the start of the year.

Off The Hook
Setting aside the Jharkhand High Court ruling, the Supreme Court quashed criminal proceedings against J.J. Irani, former Tata Steel joint managing director and Tata Sons director, in the 1989 Jamshedpur steel plant fire tragedy. Irani, who was charged with negligence in the fire that killed 60 people and maimed more than 100, could not be incriminated as the case was filed three months after the accident.

Flying Out
Gabriele Del Torchio, CEO, Alitalia, is ready to leave the airline after striking a rescue deal with Etihad Airways.

Recruited last year to help nurse the struggling carrier back to profits, Del Torchio successfully secured a deal with Etihad in less than a year’s time. The deal will see the Abu Dhabi-based carrier buy 49 per cent of Alitalia and invest 560 million euros in the loss-making Italian airline. The airline will also have a new chairman as the current chairman, Roberto Colaninno, too, has decided to step down.

Pay Cut
Bharti Airtel founder-chairman Sunil Bharti Mittal’s remuneration dropped about 45 lakh or 1.8 per cent to Rs 23.88 crore in the last financial year from Rs 24.33 crore in the previous fiscal. This, despite higher perquisitites. He received about Rs 79 lakh in 2013-14 , up from Rs 49.6 lakh a year ago. The drop in pay has been mainly due to a
Rs 75-lakh decline in the performance-linked incentive.

In The Slammer
Vice-chairman and managing director of Bhushan Steel Neeraj Singal has been arrested in connection with a Rs 50-lakh bribery scandal involving the chairman mangaing director of Syndicate Bank, S.K. Jain. Accused of offering a bribe to Jain to increase the credit limit of some companies in violation of banking rules, Singal’s application for anticipatory bail has been rejected in view of the serious nature of the crime, which involved public money.

No Deal
Rupert Murdoch’s 21st Century Fox scrapped its $80-billion offer to buy Time Warner to create one of the world’s largest media conglomerates after the latter declined to engage in negotiations. Murdoch, chairman and CEO of Fox, cited Time Warner’s refusal to come to the table to discuss takeover as one reason for the stunning turnabout. He now intends to buy back $6 billion of its own shares.

Out Of The window
Head of Nokia India, now Microsoft Devices Group (MDG), P. Balaji, has resigned less than a month after Microsoft took over the Finnish company’s mobile phone division. The global streamlining of the devices business by the US technology giant is seen as a plausible reason behind Balaji’s move. He will, however, continue to be an advisor to MDG through the transition till October 2014.

Riding High
Pawan Munjal, managing director and CEO of Hero MotoCorp and the third son of Hero Group chairman Brijmohan Lall Munjal, 59, has been elevated as the vice-chairman of flagship Hero MotoCorp, lending clarity to the succession plans at the country’s top two-wheeler maker. Munjal’s elevation was cleared by the board. He was running the firm even before the JV with Honda was dissolved in 2011.