New Delhi [India], February 2 (ANI): Savouring on a lip-smacking samosa bought by one of his fans from Indore, Bollywood actor Vicky Kaushal pens an adorable gratitude message for her on Tuesday.
The 'Masaan' actor surely received a warm welcome at Indore airport from where he will be heading towards the shoot of his upcoming flick with former Miss World Manushi Chillar under the banner of Yash Raj Films (YRF).
The 32-year old star hopped on to Instagram and posted a cheerful selfie in which he is seen seated in the car while relishing a lip-smacking samosa.
Along with the all smiles picture, the 'Uri' actor explained how he couldn't resist eating the samosa bought by his fan who knew he was 'perpetually hungry' while travelling.
Disclosing the story behind the snacks he received, he gave a shoutout to his admirer in the caption and wrote, "Kaha tha nahi kha paunga, par raha nahi gaya. (I told, I wouldn't eat, but I couldn't resist) There you go Harshita (@vickyyismylifeline)! Happy to have a fan who knows I'm perpetually hungry. Mummy Pappa ko bina bataye airport milne aa gayi saath mein samose jalebi lekar.( (Without informing her mother and father, she came to meet me at the airport with jalebi and samosa) Aunty Uncle gussa mat karna agar padh lo toh. (Don't get angry aunty and uncle if you are reading this) Lots of love to you!" 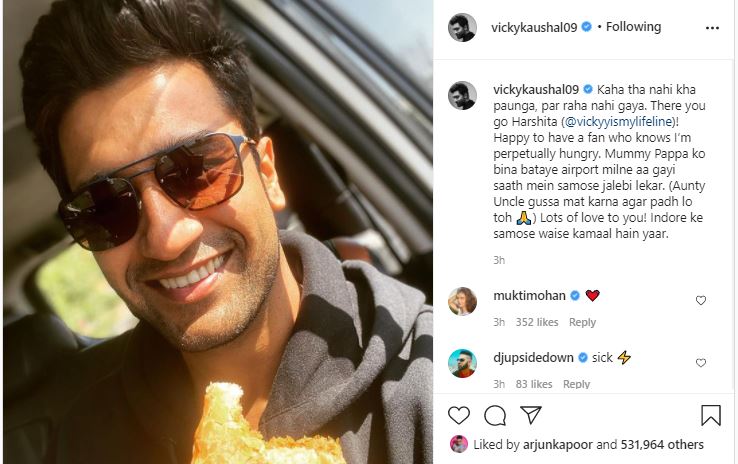 Further appreciating the snacks of Indore, he noted "Indore ke samose waise kamaal hain yaar. (Indore's samosa are amazing man.)"
Meanwhile, on the work front, former Miss World turned actor Manushi Chhillar will star opposite actor Vicky Kaushal for an upcoming comedy flick from Yash Raj Films. According to a trade source, Manushi has been signed as the heroine of the film that marks 'Uri: The Surgical Strike' actor's first comedy project.
The comedy flick will be Chhillar's second venture in Bollywood after her debut flick which is a historical drama 'Prithviraj.' The 23-year-old actor will be seen portraying the role of the Indian ruler Prithviraj Chauhan's wife Sanyukta in her debut.
Whereas, Kaushal also has much-anticipated projects like 'Sardar Udham Singh', 'The Immortal Ashwatthama' and the biopic on Field Marshal Sam Manekshaw, in the pipeline. (ANI)