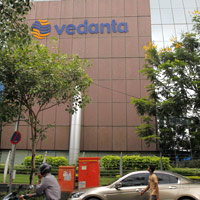 Vedanta's stock fell as much as 4.5 per cent to 941 pence in early trading on Thursday (15 May), making it one of the biggest percentage losers on the FTSE-250 Midcap Index.

Analysts on average expected the company to report revenue of $13.16 billion and core earnings of $4.47 billion, according to Thomson Reuters I/B/E/S.

Vedanta said the improvement of its copper business in Zambia, Konkola Copper Mines (KCM), was among its priorities for the current year. Production of mined metal in Zambia fell 19.2 per cent last year due to the temporary suspension of some mines.

The company also said it was working with the Goa state government and India's Environment Ministry to restart its iron ore operations in the state.

India's Supreme Court lifted a 19-month ban on mining iron ore in Goa last month, although it capped annual output in the state at 20 million tonnes.

Vedanta raised its final dividend to 39 cents from 37 cents a year earlier.