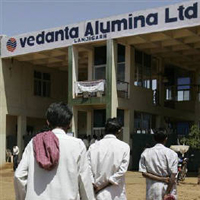 Cairn Energy agreed last August to sell a majority stake in Cairn India to Vedanta in a deal that was valued at up to $9.6 billion, but the deal, which would be one of the largest in India's energy sector, has been delayed due to a disagreement over royalty payments. India's oil ministry has been pushing for Cairn India to share royalty payments with state-run Oil and Natural Gas Corp, which has a 30-per cent holding in the Cairn-operated fields in western India but pays 100 per cent of the royalties. Vedanta and Cairn on Monday agreed to remove a non-compete fee that would cut the price of a 40 per cent stake in Cairn India by around $630 million in a move that has fueled optimism about the deal.

"Although yesterday's changes to the deal weigh on Cairn's valuation, the announcement indicates that negotiations are moving forward," Morgan Stanley said in a note to clients. "In particular, we believe they signal that Vedanta is willing to accept new, expected government conditions, which removes an important roadblock that has so far prevented Cairn from realising the value of Cairn India," Morgan Stanley analysts said in the note. Vedanta and Cairn late Monday said they had agreed to remove a non-compete provision and a related fee of 50 rupees per share, cutting the price tag for the total 40 per cent stake being sold to $6.02 billion from $6.65 billion. While the price cut is likely aimed at placating the Indian government, Cairn also agreed to sell 10 per cent of its India unit to Vedanta in a deal that would bring Vedanta's stake to nearly 30 per cent.

"The fact that Vedanta will have nearly a third of Cairn India after buying 10 per cent more by next month, they won't be desperate for the government's approval for the remaining 30 per cent stake to take controlling stake," said Jagannadham Thunuguntla, head of research at SMC Global in New Delhi.

Vedanta has already swept up an 18.5 per cent stake in Cairn India from an open offer and from Malaysia's Petronas. Cairn India Shares Down Shares in Cairn India, which have fallen nearly 13 per cent since the announcement of the deal, fell as much as 2.4 per cent to 301.90 rupees on Tuesday, as investors worried about loss of revenue due to royalty payments.

"Removal of the non-compete provision stems from a lack of clarity over the issue of royalties payments...which we believe could remain an overhang," Goldman Sachs said in a research note. "We also believe clarity on Cairn India's long-term growth strategy under a new parent would be important for investors - particularly in light of the substantial annual free cash flow.. and the absence of stated or clear investment opportunities," Goldman said.

Cairn Energy and Vedanta Resources shares rose nearly 2.5 per cent each in the London market. The Indian government is yet to approve the deal. A ministerial panel has referred it back to the cabinet with a recommendation. A government source told Reuters last month that the panel would recommend the operators of Cairn Energy's key Indian oil field share the royalty burden in proportion to their stake in the project. The cabinet has been expected to meet to decide on the deal, but the meeting has been delayed the past few weeks.

"They (Cairn, Vedanta) must be aware of the outcomes being discussed by the Group of Ministers, and are trying to be proactive," said Deepak Pareek, oil & gas analyst at brokerage Prabhudas Lilladher. Analysts have estimated impact of royalty-sharing at 65 to 70 rupees a share, but crude oil prices have moved up since the deal was signed last August. As part of changes announced on Monday, the deal will complete in two tranches, with Vedanta buying an initial 10 per cent stake by July 11. "Lowering the deal value is an indication that Vedanta is preparing to take the burden of the royalty payments as that's the main issue that has delayed the approval for the deal," Thunuguntla said.