New Delhi [India], July 21 (ANI): Former Indian cricketer VVS Laxman on Tuesday lauded England side for the "excellent comeback" to win the second Test against West Indies.
In the first Test, West Indies had defeated England by four wickets on the back off Jermaine Blackwood's gutsy knock.
Laxman, who had played 134 Test matches for India said that all-rounder Ben Stokes was a "class apart" in the second Test.
His remark came as England thrashed West Indies by 113 runs on the back of Stokes' all-round performance of 254 runs and three wickets, including the key wicket of Jermaine Blackwood in the second Test.
"Excellent comeback by England to win the second test after the loss in the first Test, especially considering a complete day's play was lost to rain. Ben Stokes was a class apart and just keeps on increasing his reputation as a player the world sits and watches," Laxman tweeted. 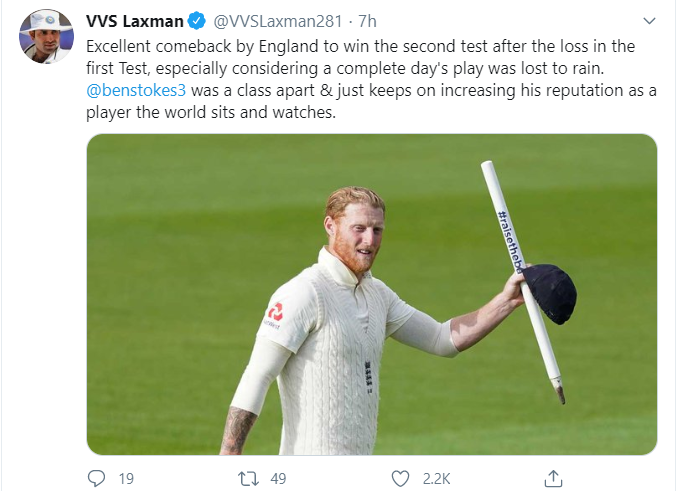 With this win, England levelled the three-match series against West Indies. The third and final Test of the series will be played from July 24 at Manchester. (ANI)