Urban Indian youth says 'IT'S NOT OK' to sexual harassment

Urban Indian youth says 'IT'S NOT OK' to sexual harassment

New Delhi [India], Aug 12 (ANI/Bloomingdale): Be.artsy, India's premier awareness enterprise, has recently established a baseline of awareness levels among educated urban Indian youth on sexual harassment.
Be.artsy was started by Shikha Mittal, a feisty entrepreneur, while in her early twenties, when she had to shift multiple jobs, having faced sexual harassment in eight companies in rapid succession. Realising that laws depend on implementation by officials with little awareness of the adverse impact of such harassment, Mittal decided that raising social awareness and subsequently converting it to action, would be her mission in life.
While Be.artsy runs awareness programs on diverse issues like financial literacy and road safety, prevention of sexual harassment has been its flagship program. Since 2010, over 25,000 people at workplaces have undergone training sessions through Be.artsy's POSH (prevention of sexual harassment) awareness programs. The proprietary "IT'S NOT OK" campaign, started in 2018, has been well received by British Telecom, MediaTek, Tata Coffee, Volvo cars, Sterling and Wilson and Yulu Bikes.
Catch them early
Youth has been Mittal's prime target. Be.artsy has organised V4V: Be on the street, a prestigious street-theatre based youth festival, since 2010. Shortly before COVID19 hit India, Be.artsy had surveyed V4V participants on sexual harassment. The survey received over 1200 responses, making this one of the most robust surveys on the topic, among youth in urban India. Following the V4V footprint, the responses were mainly from Delhi, Maharashtra, UP, Haryana and Karnataka.
As expected, youth were slightly more aware than older people of what constitutes sexual harassment, and unfortunately, men continue to think that this is a women's problem. The response rate for the survey was a high 50 per cent for women, and a below-average 24 per cent for men. The average age of respondents was 21. Women averaged 22 years, while men averaged 19 years old. Half the respondents were under 21.
Confusion abounds
Most young people are unaware that what they are experiencing or witnessing constitutes sexual harassment. They seem to be under the impression that violence or sexual assault needs to be involved for any action to be sexual harassment. Up to 50 per cent men and 32 per cent women are unaware that requests for sexual favours are a form of sexual harassment. 26 per cent to 37 per cent men and 10 per cent to 26 per cent women are unaware that circumstances surrounding the actions, like coercion by threats/benefits in exchange for sexual favours, are factors in determining whether the actions constitutes sexual harassment.
Physical contact, unwelcome sexual conduct and showing pornography are more easily identified as sexual harassment (85 per cent to 88 per cent), yet, 12 per cent -15 per cent don't even recognise these obvious forms! Men's lack of recognition is as bad as 23 per cent. A small, but very confused, minority consider any form of sexual activity at all as harassment.
It's common, it's enraging, but youth feel helpless
Sadly, most respondents have faced sexual harassment already. 57 per cent women and even 17 per cent men report yes. An additional 16 per cent are unsure whether what they experienced is sexual harassment, but they suspect it is. Only 22 per cent women have not been harassed, while 66 per cent men were free from harassment. 72 per cent women and 58 per cent men know someone who has been sexually harassed. 15 per cent suspect, but aren't sure.
Either because they are not sure that incidents they know about constitute sexual harassment, or maybe the victim didn't confirm it. Men seem to be more oblivious of sexual harassment of their peers, 27 per cent saying they don't know of any case. More women (97 per cent) than men (95 per cent) are aware that men, too, can be sexually harassed. Certainly, this is a live issue. However, Be.artsy has found during its POSH campaigns that older, more senior people, who are in positions where they can make a difference, think this is a minor problem, and that incidence is low.
Unfortunately, the redressal mechanisms put in place by law do not inspire confidence. Hearteningly, youth don't want to take it lying down. 85 per cent are sure that the victim should take action, though men are twice as likely to advise silence than women. Going to the police is most popular at 64 per cent, followed by telling family at 58 per cent. Men are 16 per cent more likely to go to the police and 7 per cent more likely take matters in their own hands than women. 8 per cent more women than men would tell peers. The POSH Committee/ICC/Dean or HR are seen as viable by only about 40 per cent people. Professors/ managers are even less trusted at 27 per cent.
In general, urban Indian youth is somewhat aware of what sexual harassment is, but Mittal would like the numbers to be much higher than 70 per cent for 'herd immunity'. Mittal says that awareness on sexual harassment and other gender-based crimes can only be created by focusing early education on bodily autonomy and informed consent. As an expert in facilitating conversations on this almost-taboo topic, she says that building empathy, understanding one's rights and responsibilities, and commitment by the leaders of organisations are the critical base on which efforts to eliminate sexual harassment and other gender violence have to be based. It is heartening that young India is more aware and more empathetic than the previous generations.
Awareness

In the chart, ideal awareness would have respondents 100 per cent agreeing only to items defined in law as sexual harassment (marked *). Items marked # are stronger offences in law).
Prevalence 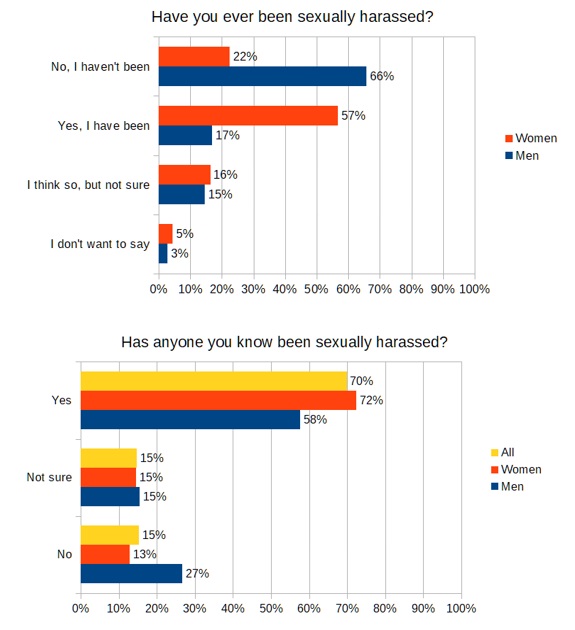 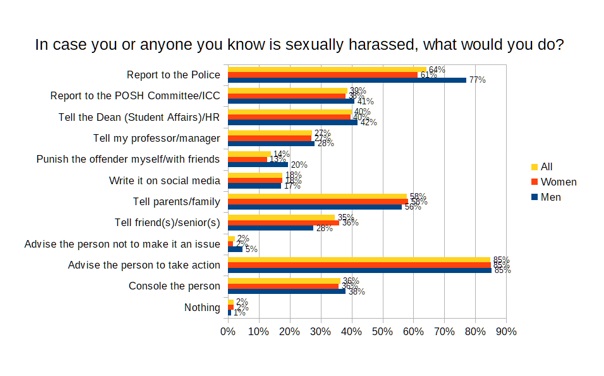 This story is provided by Bloomingdale. ANI will not be responsible in any way for the content of this article. (ANI/Bloomingdale)