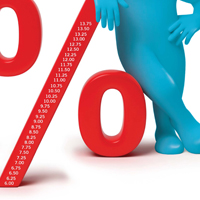 
All these factors have left companies badly bruised. India's largest company, the government-owned Indian Oil Corporation (IOC), which is already burdened with huge under-recoveries on account of the oil subsidy, reported the highest interest payout of Rs 5,895 crore (nearly $1.1 billion at current conversion rates) among 913 companies.

Its interest payout grew 95.4 per cent in fiscal 2011-12. Petroleum minister S. Jaipal Reddy explained that as a result of reduced cash flows due to under-recoveries, IOC had been forced to raise funds for expansion and modernisation. Last October, the company's board had given its approval for raising its borrowing limit by Rs 30,000 crore to Rs 110,000 crore.

Among companies that have reported the fastest growth in interest payouts in FY 2011-12, real estate company Puravankara Projects figures right at the top. Its interest payout grew 4,608 per cent to Rs 192.8 crore, while its net profit was barely Rs 129.3 crore on revenues of Rs 810 crore.

For the moment, it seems there is no respite from the interest menace. "It is going to be a tough year. Declining crude prices could have brought down fiscal deficit and inflation. But (poor) monsoon and global woes have offset those calculations," says Ranade.

Clearly, there is very little that companies can do but to grin and bear it.