Shane Watson talked about his other interests and passions, his love for entrepreneurship, lessons he learnt from his cricketing career and much more 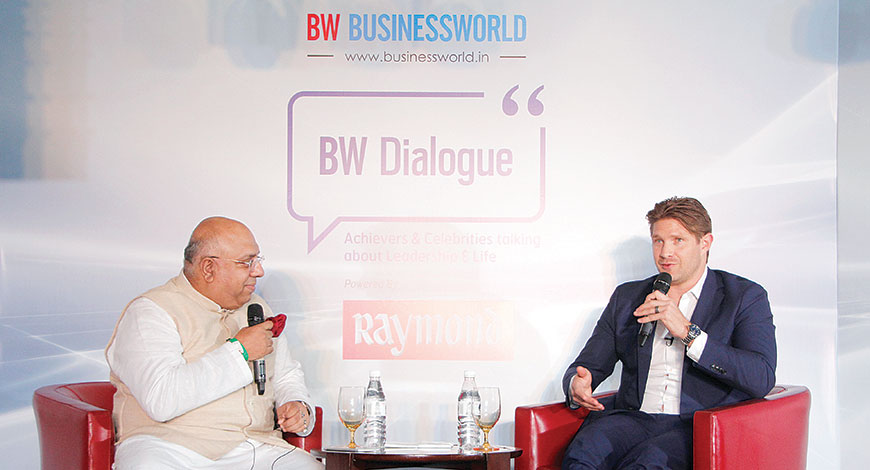 The series ‘BW Dialogue’ brings achievers and leaders from all walks of life to share their leadership and life lessons. Shane Watson, the swashbuckling all-rounder, who captained Australia in all the three formats of cricket, was the latest  to be in a conversation with BW Businessworld Editor-in-Chief Annurag Batra. Thirty-seven-year-old Watson, who holds Indian cricketing greats like Rahul Dravid and Mahendra Singh Dhoni in high esteem, talked about his other interests and passions, his love for entrepreneurship, lessons he learnt from his cricketing career and much more in an hour-long conversation, in a jam-packed auditorium.

Who is your favourite Indian cricket player?
To be able to play under Rahul Dravid for Rajasthan Royals was an incredible experience. He is an incredibly humble man for someone who has achieved great heights in the game of cricket. He is able to connect with the most senior players and with the youngest player of the squad. Not every high achieving cricketer has the ability to connect with various people across the team. So, Dravid is absolutely one of my favourites.

The one cricketer that I got to know recently, whom I did not know so well while playing a lot of games against him while representing Australia and playing against India, is Mahendra Singh Dhoni. I have played a lot of games against him, obviously! He gives the opposition absolutely nothing. He is ice cool and there is no expression at all, so you never know what kind of a person he is because he never gives anything away. Even after the game, he is always very polite and that’s it.

However, when I played this season for the Chennai Super Kings I started to get to know him. And, it is an absolute privilege, because he is a very intelligent guy, some of the most complex thing that are there in the world and in life, and he manages them pretty simply.

Your latest passion is performance coaching — you have set up an academy. Tell us how this academy is shaping up and what are your plans?
The business that I set up recently stems from my own journey especially from the last two-three years. I have seen many waves down the road, when performance started to drive low. It made me face things. My son was only two years old and I started facing difficulty in things in the field due to injuries and playing fast bowling that has always been my skill.

You were in and out of hospitals due to the injuries, but you bounced back and you performed well. Tell us what can the corporate world learn from your career in cricket?
There is one thing that everyone can learn — that is the burning desire to do best that you can and that has always been inside me. Cricket has always been my love and passion, therefore it is always been a deep down burning desire.  So, I just kept pushing my injuries back and that was a regular thing in my career, especially in my mid-20s I always knew that this is where I wanted to reach. I could perform consistently for Australian team and there are always setbacks. Life is not a fairy tale. Reality is that there will always be challenges, they will be there to test you and, most importantly, to learn from. There will be trying times and you will have to rise again. You have to learn your lessons. So, I always believed that everything happens for a reason. To learn and gain something positive from it. There were times when people have told me to stop bowling when I was 26. Even a few medical staff told me to stop bowling because my body is not built for bowling. But I just never accepted it.

You talked about learning. If you had to Tweet about your learnings, what would they be?
I put way too much pressure on myself and the results… and the outcomes. I was so transfixed on the outcomes that it actually used to stifle my performance. To perform and get better and improve all the time, to perform well every single time I went out to play is just not how it works.
There are factors that are beyond your control that come in and they can affect your performance. It was only a couple of years ago that I fully understood that the only thing you can control is the process; the actual execution of the plan.

So it is about pressure... the possibility of getting it? Are  you trying to play safe?
Well... but it is also about trying to analyse it in my conscious  mind. Trying to analyse and trying to process it all so quickly in the end means that I am mentally burned out. But the most powerful thing you can tap into is your unconscious mind which is a guiding instinct. You can’t articulate why something feels right. But the unconscious mind is there for you to be able to process all the different experiences you have had and bring an answer to you. You can’t articulate why it just feels right, but it’s there. And that is the most powerful thing. So, if you can tap into that, as regularly as it is possible, you can actually process it in your conscious mind… that’s when the best results happen.

We know that you are very driven in everything you do. So, tell us what makes you believe that you will be a great entrepreneur?
I cannot do anything by half measures. I have to give it 100 percent and do it to the best of my ability.  I love reading  books on business and entrepreneurship. And then, I have got incredible people around me as well. Fortunately, because of my cricket, I have access to incredibly successful people and got an opportunity to learn the ups and downs through  their experience in business.

Every setback that I have faced or if something has not gone according to the plan, I now know it is for a reason. I know it is a learning experience. So, I know if I can continue to learn after every thing  that has happened and continue to depend on which way life takes,  then I can do it to the best of my ability, day in and day out.

You told me earlier that you love reading. Which is the last book that you read?
I recently read a book by Tom Brady on his method of training -- The TB12 Method: How to Achieve a Lifetime of Sustained Peak Performance and Phil Knight’s Shoe Dog. He is the guy who started Nike.

Tell us what was the role of your family in making you a cricketer?
My father had a great passion for cricket and I have got this from him. He left playing at a young age due to injury.  We were living in Adelaide, I was six or seven then and  I remember that my father used to take me for Test matches between West Indies and Australia. So, I developed my love for cricket. My mom was a swimmer so it is something I developed genetically. I always got their support when I needed. When I had a back injury, I bounced back with their support. I have seen a time where I have seen cricketers derailing from careers due to alcohol.

Australia have witnessed scandal. Tell us from corporate perspective, how does a team or a company recover from it  and how did Cricket Australia recover from it?
The takeaway is that just because you do something bad doesn’t make you a bad person. Also, on the flip side, just because you have done something good does not mean that you are a good person. Steve Smith and Dave Warner are really good people.

We don’t have a sports culture unlike Australia and other many countries. You have a sports academy. If you have to run that in India what kind of support you would need from corporates in India and what would be your expectations?
It starts from a very young age, I suppose from the age of two, to develop good skills, to sustain a healthy lifestyle. You become a little cautious by the age of seven and eight about how it would look like. So, you have to start from a very young age. It will improve your skills and give you a chance to stay active. One of the most important things where a business or a framework sets up, I would have got this information when I was young. I would have got to understand the nuances of performance and the turns it would take.

What is Shane Watson’s bucket list?
First goal is, of course, for the family but for the next phase I would love to be a successful businessman. I have seen throughout my career where fellow cricketers think having a shining cricket career is the end of it. Why can’t the next phase be as successful?