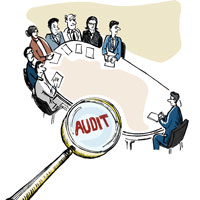 08 November, 2014
Print this article Font size -16+
Any discussion on the audit profession in India often descends into a deeply polarising face-off between the multinational accounting firms, led mainly by the Big 4 — as the quartet of Deloitte, PwC, Ernst & Young and KPMG is called — and the rest of  the audit ecosystem, including the regulators. That face-off has reached a crescendo with the long-awaited Companies Bill, passed by the Lok Sabha this week, proposing several landmark measures such as rotation of auditors, a super-regulator with wider powers to penalise, and restrictions on non-audit services by auditors.

These measures are theoretically expected to cut into the combined clout of the Big 4 and create a more level playing field for smaller home-grown firms of chartered accountants.
Today, a major portion of the work from the big corporate firms goes to the Big 4. Revenues beyond the top corporates are generally slim pickings. According to a survey conducted by Chennai-based training institute Prime Academy, auditors are paid, on average, only Rs 16 for every Rs 1 lakh invoiced. This leads to a vicious cycle, which keeps audit work with the big firms, since the small firms never make enough money to improve their infrastructure, thus not being in contention for bigger audits. Rotation of auditors, every 10 years, as the Companies Bill proposes, will help break this chain, as companies will be forced to look beyond the Big 4. It is also expected that the auditors will be kept from being over-familiar with the corporate they audit, thereby leading to possible compromises.
But will such measures achieve anything? Amarjit Chopra, who headed the Institute of Chartered Accountants of India (ICAI) in 2010, admits it is foolish to expect a change overnight. Take the case of Global Trust Bank which went bust about a decade ago. Following an RBI diktat, the bank had appointed PriceWaterhouse as its auditor in place of the incumbent Lovelock & Lewis. The only problem was that both PriceWaterhouse and Lovelock were affiliated to the same international network, PricewaterhouseCoopers. Rotation will end up being an exercise of companies rotating between the Big 4, or among firms of the same international network.
Vishesh Chandiok, national managing partner at Grant Thornton, cautions that the move could become counter-productive. “If not properly implemented, mandatory rotation could further affect the audit market concentration negatively. The biggest risk is that it has the potential to wipe out medium-sized firms with long-term relations.”
But G. Ramaswamy, who was the president of ICAI when the Companies Bill was introduced last year, argues in favour of mandatory rotation. One, he says, it will give a better impression of independence of the auditors; and two, it will serve as a type of internal check and balance. It is clear that the Satyam scandal, which is attributed by many to the negligence of its auditors, still rankles the ICAI as well as the government.
Ramaswamy says that a bigger threat to quality may come from another measure that the government introduced a few years ago. Traditionally, auditors in India were not permitted to acquire business from a new client by quoting a lower fee. Later, under-cutting was permitted, ostensibly to help smaller firms with lower costs. But this has again resulted in consolidation between the Big 4, since, with their economies of scale, they were able to provide services at costs lower than the mid-sized firms. Prime Academy’s survey found out that in 2011, seven out of the top 10 audit firms in India were part of the Big 4 network.