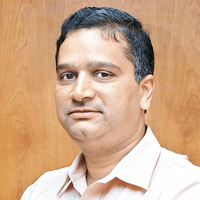 Indian agriculture has historically been subjected to several disadvantages — from the condition of areas under cultivation to productivity, and from indifferent policies through the value chain to weak marketing links. Neglected warehousing has added to our woes; in areas like horticulture, wastage could go up to 40 per cent of production. High dependence on monsoons and uncertain weather has made farming less attractive, leading to migration to urban areas.

However, while these factors could be considered to be extraneous to the system, the government’s pricing policy (through minimum support price) has distorted cropping patterns in favour of rice and wheat, leaving the country perennially in the deficit for pulses and oilseeds.

Also the system of open-ended procurement by the Food Corporation of India has meant that the government is the largest hoarder of foodgrain. Surplus in granaries often coexists with shortages in the market. Absence of consensus or fear of losing surpluses has meant that we have no defined policy on export of surplus farm products, be it rice or cotton. In this set-up, the credit system, too, has played a role in creating distortions in terms of flow of funds, repayments and marketing practices.

While banks are compelled to keep aside 18 per cent of their overall credit for the farm sector, they at times prefer to slip up on this target and deploy the funds in National Bank for Agriculture and Rural Development’s (Nabard’s) Rural Infrastructure Development Fund, which is a safer bet. Given the vicissitudes of nature, farming has a tendency to generate higher non-performing assets (NPAs) than other sectors (a fact borne out by the Reserve Bank of India’s Financial Stability Report). This creates issues for banks whose profitability is ultimately impacted by these assets.

Apart from this, monsoon failures lead to other interventions such as interest rate subvention or restructuring of loans and write-offs, which though they are supposed to be compensated by the government through the budget, are often delayed. As per the RBI’s own admission, there is still considerable dependence on the informal sector for loans for farmers. And where formal loans are available, transactions such as procedures, paper work, staff indifference, often access, when several rounds have to be made to procure the loans, act as effective barriers.

The informal sector does provide credit at a higher cost, but with added advantages such as buyback, supply of seeds, insurance, etc. The apprehension relating to the proliferation of corporate and contract farming (where there is less dependence on banks for finance as the contractor pays for it) has also come in the way of commercialisation of agriculture.

Hence, we are still operating on old existing systems and not willing to change significantly to really transform agriculture.

Systemic Loopholes
At the post-harvest stage, too, there is a major lacuna in terms of regulation when it comes to the warehouse receipt. Crops are typically grown once and made available throughout the year. The holding power is with the intermediary who is able to buy at a low price and regulate the prices through the year by controlling supply. There could be 6-10 intermediaries in the agri-value chain in India. Intuitively, the farmer gets only a fraction of the price, and studies have shown that in the case of horticulture, the farmer receives 30-35 per cent of the final price paid by the consumer.

This holding power can be transferred if the warehouse receipt is made negotiable and the banks are able to then lend money against this receipt. If this could be accomplished, the farmers would gain holding power and supply the product through the year. The cost would also come down as this process percolates. But while the Warehousing Development and Regulatory Authority is making the right sounds, not much is moving.

Therefore, Indian agriculture still has not really been able to grow in the desired manner on account of inadequate support by appropriate policies and the financial system to enable sustainability. Farmers also cannot sell their produce outside their territory as few states have passed the model Agricultural Produce Market Committee (APMC) acts.

With farmers being squeezed from all ends, it is really not surprising that farming is losing its sheen. And this will have serious repercussions for a country that has grand plans for food security for its large population. Focus on rice and wheat has improved distribution of these basic foodgrains, but this has come at the expense of other products that, too, are vulnerable to inflationary forces.

There is a need to revisit our approach to agriculture and farm lending and integrate all the pieces under one umbrella to make agriculture self-sustaining. There is no other way out.