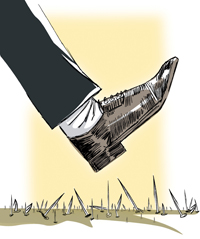 08 November, 2014
Print this article Font size -16+
It is becoming a trend among promoters who do not want to honour their obligation to provide an exit to their private equity investors to approach the Reserve Bank and get their obligations annulled on the basis of illegality,” laments Siddharth Shah, partner in charge of mergers and acquisitions at Mumbai-based law firm Nishith Desai Associates.

PE investors have been facing uncertainty on multiple fronts, including taxation and regulatory, not to mention the general investment climate. But after the developments of the last fortnight, things seem to be looking better except the imbroglio over the validity of ‘put’ options.

In September, after a lull of a few months, the RBI issued notices to more companies that had received foreign equity funding with put options — contractual rights that guaranteed a minimum rate of return to investors — ordering them to delete the provision or just unwind the transaction. The RBI, unlike regulators in other hot investment destinations, has stipulations on the price at which an investment in the country can be sold by a foreign investor. “What is unfortunate,” explains Shah, “is that unscrupulous promoters are abusing this ‘absurd interpretation’ of legal provisions by the RBI to wriggle out of their commitments to their investors.”

Put options are clauses in investment agreements that require a promoter to allow an investor to exit at a pre-determined price, usually calculated as a certain percentage of return (often as high as 25 per cent annually) at the end of the investment period. Analysts claim that this is essential because in India the capital markets aren’t as developed as, let us say, China, where a listing on the Hong Kong exchange gives almost everybody an exit.

The Way Out
The usual contractual modes of exit are; first, an IPO, priced so that the selling investor gets his return. If that does not happen, then second, they can go for a buyback by the company. If the buyback cannot be implemented, then the put option that mandates the promoter to buy the shares kicks in. Some contracts even go as far as to state that if a promoter fails to honour this obligation, the investor will have the right to sell the company’s assets to get his money back.

The RBI’s position is that the put option in contracts amounts to a debt transaction. After all, if your investment is protected, with an assured minimum rate of return, then what is the risk? Lawyers cite RBI’s notices in this regard, pointing out that such options are nothing but over-the-counter derivatives, which are prohibited under the Foreign Exchange Management Act. Moreover, many of these transactions happen in sectors such as realty and hospitality, where overseas debt funding is subject to a strict approval process.

But Gautam Mehra, who heads the financial services, regulatory and tax practice at PwC, argues that the RBI’s stand also impacts those who do not want to invest in debt. “A lot of investors are looking for a protection of their commercial interest, because when the Indian promoter refuses to budge on valuation, the investor must get some kind of security, because he has an obligation to his own investors.”

When an investment gets stuck for want of an exit opportunity, the PE fund has to delay its returns, which impacts its track record. An investment banker recounts how last year, a PE fund was forced to accept a hair-cut of two-thirds of the value of its original investment and exit the investment to meet its investor obligation.

Another reason for seeking a guarantee is companies’ performance. A KPMG analysis shows that of the 300 companies covered in a 2011 survey, only a little over a third gave returns of over 20 per cent, with almost a third giving negative returns. But Raghubir Menon, partner at law firm Amarchand Mangaldas, says many investors are forced to exit for reasons that are not necessarily a function of returns, but because of extraneous factors such as fund life. In an Indian portfolio company where promoters often have their entire wealth or assets tied up in that one company, he argues, a put option is reduced pretty much to a paper right, which is not really an effective right.

Another corporate lawyer recounts how when faced with a lack of resources to repay the investor, a company wrote to the RBI asking them to examine the validity of the option clause. Armed with a letter from the RBI saying that the contract could not be enforced in India, the promoter was able to stonewall the arbitration proceedings in Singapore against him.

Last September, the Department of Industrial Policy & Promotion, in its foreign direct investment (FDI) policy, caused uproar in the PE community when it mandated that if an investment had an option of any kind, it would have to be considered as debt, requiring a different set of approvals. A month later, it amended the policy deleting this clause, leaving the issue still wide open to debate.

What’s the way out? “The only way this can be settled is through a legal challenge. Unfortunately, no PE investor seems willing to take on the RBI,” says Shah.

The writing on the wall is clear, though. Exit options with guaranteed returns are a strict no-no. “But most investors still prefer to amend the (put option) clause later if the RBI objects,” says Aakash Choubey, partner at Khaitan & Co. It all comes down to the promoter’s trustworthiness.

But worries remain. Says Reshmi Khurana, associate managing director at Kroll Advisory Solutions, which helps PE funds with pre-investment due diligence, “Fewer exit options affect the prospects for new deals, as investors find it difficult to raise funds a second time. The uncertainty is surely a dampener.” While industry is asking for clarity, the hope is that the policy will evolve to permit some kind of guaranteed returns. Now that will be a real boost!