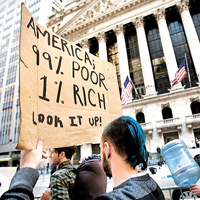 Flying Numbers
Is the Indian aviation industry out of the woods? That would be surprising given the continuous news of most airlines making losses and low-cost airlines closing shop. Low-cost carrier Indigo has been the only exception; it posted an 18 per cent jump in profits in the year ended March — taking profits from Rs 551 crore to Rs 650 crore. Now, the International Air Transport Association says India's passenger traffic grew 20 per cent in August. Looks like it is good news for Indian aviation — at least for the time being.

Raising The Bar
$400 billion. That's the turnover target the Indian government has set for the electronics goods industry by 2020 in the National Policy on Electronics. That is quite a target for an industry, which recorded a modest turnover of $20 billion in 2009. The draft policy also proposes to have 200 electronics hubs all over the country. This entails an investment of about $100 million over the next eight years. That is, if the target is set to be achieved.

Give And Take
Things look bright on India's foreign trade front. According to data released by the commerce ministry, India's exports grew 44.2 per cent in August to $24.3 billion, while imports grew 41.8 per cent to $38.4 billion. However, the ministry has warned that exports could be hit in the coming months due to uncertainty in the western markets.

Words, Words, Words
It might have been a realistic remark made on the spur of the moment. However, Infosys chairman emeritus N.R. Narayana Murthy's comment that engineers coming out of the IITs are not of good quality have IITians up in arms. Popular novelist and an IIT alumnus Chetan Bhagat hit back saying those who run body shops and calling them high-tech should not make such sweeping comments. Peace.

In The Black Money
Indians who have secretly stashed away their wealth in Swiss banks will no longer be able to remain anonymous. Starting next fiscal, India and Switzerland will exchange information on tax-related matters. This is aimed at collecting data on black money. However, it remains to be seen if the move will pacify civil society activists who target the government for not taking action on black money.