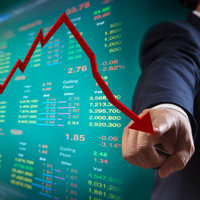 08 November, 2014
Print this article Font size -16+
The stockmarkets, the rupee as well as gold and silver prices plunged on Thursday 20 June 2013 as sentiment turned bearish in global markets after the US Federal Reserve said it plans to gradually withdraw bond purchase programme. The BSE bemchmark index Sensex extended intraday losses and fell 526 points to close near 18,700 mark.

The rupee, the worst Asian performer on Thursday in a global market sell-off, was supported by the Reserve Bank of India, which stepped in to sell dollars after it slumped to a record low of 59.9350 against the dollar.

Government bonds slumped as the rupee's steep fall to a record low. The rupee ended 1.4 per cent lower on day after having touched a life low of 59.9850, prompting the Reserve Bank of India to rush in to sell dollars via state-run banks which helped it recover some ground by the close.

The prospect of an end to cheap Fed cash is leading to bond liquidation across emerging markets including India, which is stuck in a cycle in which a weaker rupee is making foreign investors sell debt and thus, causing further currency losses.

Foreign institutional investors (FIIs) have sold a net of $4.8 billion in the 21 sessions to Wednesday.Yet, traders said the RBI's firepower was likely to be limited given it has foreign exchange eserves of $290 billion, only enough to cover imports for seven months.

The mixed government messages and a cautious RBI are exacerbating the perceived vulnerability of a country suffering from a record-high current account deficit in the midst of a global downturn sparked by potential tapering in U.S. monetary stimulus and a weakening Chinese economy.

"Both the willingness and ability appear to be limited for the government," said Samiran hakrabarty, head of research at Standard Chartered Bank in Mumbai.

"The RBI is also favouring relative free movement of the currency," he added. The 30-share Sensex started off badly after losing over 423 points in early trade, fell further by 501.34 points, or 2.60 per cent, to slip below 19,000-point level to trade at 18,744.36 points at 1400 hrs. All the sectoral indices led by realty, metal and banking were trading in the negative zone with fall up to 4.77 per cent.

Trading sentiment turned extremely bearish after the rupee slumped to life-time low of 60 against the dollar and a weak trend in the global market on concerns that inflows to emerging markets may hit after US Fed taper off its stimulus programme later this year.

Besides, a weak opening in the European markets too accelerated selling activity, dragging down the Sensex, they said.

Indian gold futures extended declines on Thursday afternoon by more than 4 per cent to hit their lowest level in more than two weeks but in the domestic market a seasonally slack demand period outweighed the fall in price. Silver fell more than 5 per cent.The actively traded gold for August delivery on the Multi Commodity Exchange (MCX) was 3.79 per cent lower at Rs 26,950 per 10 grams, after hitting a low of Rs 26,890, a level last seen on June 3.

"I have not been receiving calls from traders. Demand is still lukewarm compared with what we saw in April... The rupee price of gold is higher compared to what it was in the month of May," said a dealer with a private bullion-importing bank.

Demand offtake revives in August as the festivals and weddings season starts again. Gold imports into India, the world's biggest buyer of the metal, fell from an average of $135 million in the first half of May to $36 million in the second half, Finance Minister P. Chidambaram said.

India has ruled out a blanket ban on gold imports or any increase in customs duty from the current 8 per cent.