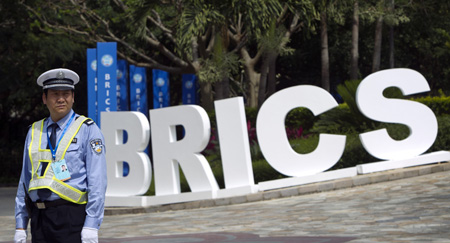 08 November, 2014
Print this article Font size -16+
Russia and China warned on Thursday (5 September) that the end of the US Federal Reserve's bond-buying programme could have a profound impact on the global economy and urged caution.

Speaking ahead of the start of the Group of 20 summit, when economic issues and Syria will top the agenda, host Russia and China, the world's second largest economy, made clear their concerns about the widely expected 'tapering' of the Fed's multi-billion dollar monetary stimulus policy.

Zhu Guangyao, China's deputy finance minister, urged the United States to be "mindful of the spillover effects and work to contribute to the stability of the global financial markets and the steady recovery of the global economy."

But, briefing reporters ahead of a meeting of the BRICS emerging markets caucus during the G20 talks, Zhu played down the possibility of a bailout for any country in financial difficulty.

The country hardest hit, India, has not approached the other BRICS - which include India and South Africa - despite issuing a public appeal last week for joint forex intervention after the rupee tanked, Russia's summit coordinator Ksenia Yudayeva said.

"We didn't agree on specific measures yet," Yudayeva told a separate briefing, adding that the picture would be clearer when G20 finance ministers meet again in October.

"The countries that have faced the biggest recent capital outflows also have quite weak fundamentals," she said, suggesting that both domestic and international factors were at play in the most troubled economies.

Chairman Ben Bernanke triggered a selloff in emerging market currencies, stocks and bonds and a flight to the dollar when he in May raised the possibility of winding down the Federal Reserve's $85 billion per month bond-buying programme.

The Fed is widely expected this month to take its first steps to reduce the extraordinary monetary stimulus, with potentially huge implications for a global financial system that has come to depend on a cheap and abundant supply of dollars.

India also expressed concern about the end of the monetary stimulus programme.

Arvind Mayaram, economic affairs secretary at India's ministry of finance said: "I think there should be a very strong statement on the G20 having a consensus on the concern about the spillover effects.

"I think if a strong statement is made on these two points, it will have a major calming impact on the markets in the emerging economies," he told reporters ahead of the summit.