US Senate Rebuffs Obama Request To Shift Funds For IMF 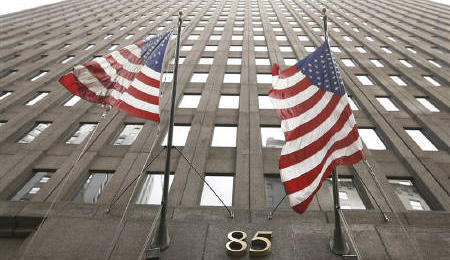 08 November, 2014
Print this article Font size -16+
US lawmakers late on 11 March' 2013 rebuffed a request by the Obama administration to approve a permanent increase in US funding to the International Monetary Fund in a setback for IMF reforms to boost the voting power of emerging economies.
The reforms need congressional approval because they involve shifting and making permanent a $65 billion US contribution to an IMF crisis fund.
The US authority is necessary to finalize a historic deal agreed by IMF member countries in 2010, that would make China the IMF's third-largest voting member. It would also increase the say of other emerging economies such as Brazil and India, which have long argued that their growing clout in the world economy should be reflected in institutions like the IMF.
After putting off the request last year because of the US presidential election, the US Treasury sought to tuck the provision into pending legislation in Congress that aims to avoid a US government shutdown at the end of March.
The Republican-controlled House of Representatives rejected the IMF funding request last week, but the administration hoped the Democratic-led Senate would include it in its version of the funding bill.
After days of negotiations, authors of the bill in the Senate Appropriations Committee rejected the request as too politically sensitive in the tense budget environment in Washington, where the sweeping government spending cuts triggered on March 1 are starting to be felt.
Senate Republican aides said they fought to keep the bill to fund government agencies free of any provisions that had not previously been approved in the House of Representatives, in part to ensure that the legislation would win enough votes for passage. A Democratic aide last week acknowledged that some lawmakers view IMF funding as inherently controversial, even though the request did not seek new funding.
The Obama administration will have another shot at winning approval for increased IMF voting power when Congress starts work on a new set of spending bills later this spring for the 2014 fiscal year, which starts on October 1.
But failure by President Barack Obama to reach a deal with Republicans to shrink the US budget deficit could complicate any new requests for IMF funding, aides cautioned.
A Treasury official could not be reached for comment on the decision, due to the late hour.
Concerns Over US Influence
In a letter to congressional leaders on 11 March' 2013, more than 130 academics and global policy pundits warned that failure to authorize the IMF funds could diminish US influence in the global lender.
In a letter to House Speaker John Boehner and Senate Majority Leader Harry Reid, the pundits emphasized the importance of the IMF's role in the world economy and the influence of the United States as its largest shareholder country.
"Additional quota resources for the IMF are essential to preserve its central role in a global financial system that benefits the United States," the letter said.
"Realignment of IMF quota shares, while preserving US influence in the IMF, will enable the IMF to respond to shifts in the global economy, involving emerging powers more deeply in the institution and avoiding their disengagement.
"Positive action by the US Congress on both elements will also unlock financial contributions from other countries."
Signatures of the letter included Tim Adams, former under-secretary of the US Treasury; Martin Baily, ex-chairman of the Council of Economic Advisers; Ken Rogoff, former IMF chief economist and now at Harvard University; John Sewell, former president of the Overseas Development Council; Jo Marie Griesgraber, executive director of New Rules for Global Finance; Gawain Kripke, policy advisor for Oxfam American; Christopher Padilla, former under secretary of commerce for international trade; Robert Richter, producer of The Money Lenders; and James G. Wallar, ex-US Treasury attache to Iraq, EU, Afghanistan, Russia and Germany.
Last week, 19 high-level US officials, executives and legislators wrote a similar letter, also urging lawmakers to pass the legislation to maintain US leadership in the IMF.