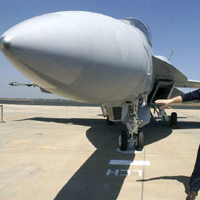 "I wouldn't be surprised if this one were reopened for further evaluation," he said.

The US companies are hoping for explanations that will let them better understand Indian processes and procedures with an eye to future competitions.

The US Edge
The United States is widely seen as having the technological edge to win Indian military contracts. About $50 billion worth are expected to be up for grabs in the next five years.

In the past three years, India agreed to buy some $10 billion in US military hardware, including six Lockheed C-130J military transport aircraft and eight long-range Boeing P-8 maritime reconnaissance and anti-submarine warfare aircraft.

Lockheed and Boeing, the Pentagon's top suppliers, campaigned aggressively for the fighter order and vowed on Thursday to keep chasing the Indian market.

Boeing said it looked at India as "a long-term investment and a long-term partnership well beyond the fighter competition."

The company is offering its Apache and Chinook rotorcraft in competitions to supply India 22 attack and 15 heavy lift helicopters among other opportunities it is pursuing, said Damien Mills, a spokesman for Boeing's military aircraft unit.

Lockheed said it was in talks with India about supplying another six C-130Js, in addition to the first six that began to be delivered in February.

The company also has has several unspecified products beyond its F-16 fighter "suitable for India's security needs," John Giese, a Lockheed spokesman, said in an email.