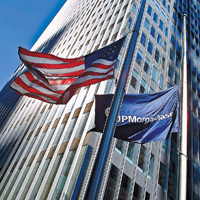 In the latest twist in a scandal that has tainted the reputation of the largest US bank and led to calls for greater oversight of its chief executive, Jamie Dimon, the main target of the investigation is Javier Martin-Artajo, who worked in London as the direct supervisor of Bruno Iksil, the trader who became known as "the London Whale," the sources said.

The US is also looking at Julien Grout, Iksil's junior trader, according to one of the sources. Both sources spoke on condition that they not be otherwise identified as the investigation is ongoing.

Reuters reported on Thursday that Iksil, who earned his nickname after making outsized bets in a thinly traded derivatives market, is cooperating with the government and will not face any charges. His cooperation is essential to any arrest, the same sources said.

The timing of the possible arrests, which would take place in London, was not clear, the sources said. US authorities plan to extradite the former employees to the US, they said. Lawyers for Martin-Artajo, Iksil and Grout did not immediately respond to requests for comment on Friday, 9 August. All three employees have since left the bank.

A Hard Year For JPMorgan
JPMorgan had to scramble to unwind Iksil's derivatives positions after they came to light in April 2012, leading to the massive loss. The loss highlighted the scale of the bank's risk-taking activities and sparked public outrage. Critics said JPMorgan should not have been able to engage in such risky behavior while it engaged in commercial banking.

Around a dozen of the bank's employees changed jobs and several, including Chief Investment Officer Ina Drew, left the firm.

JPMorgan's board cut Dimon's 2012 bonus and a shareholder movement to strip Dimon of his dual role as chairman of the board drew some support, though it ultimately failed. Two JPMorgan directors left earlier this year.

A Question Of Marks
The criminal investigation is focusing on whether anyone responsible for the trades tried to deliberately hide the losses them by inflating the value at which they were recorded on JPMorgan's books at the height of the scandal, during the first half of 2012.

A source familiar with the structure of the group said Grout recorded the prices of positions on the trading book for the team.

A series of communications between Iksil, Martin-Artajo and others in the bank also show that throughout the early spring, as losses mounted in the portfolio, Iksil argued for the group to cut their losses and sell their positions, but he was ordered to keep increasing them.