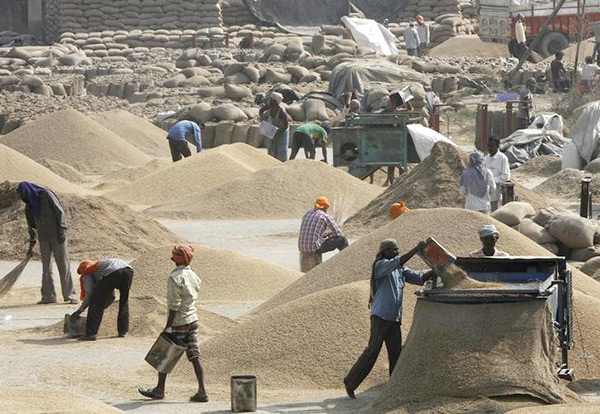 02 December, 2014
Print this article Font size -16+
In a major victory for India, Washington and New Delhi have resolved differences over the food stockpiling issue at the World Trade Organisation, paving the way for implementation of the pending trade facilitation agreement to ease customs norms. The deal gives new Prime Minister Narendra Modi a victory without major concessions.

A breakthrough in trade talks between India and the United States is a significant step in efforts to get the world trading system "back on track", World Trade Organisation Director General Roberto Azevedo said on Thursday.

If ratified by all WTO members, the India-US deal would revive a global trade agreement done in Bali, Indonesia, last December, which would be a "major boost to the WTO", Azevedo said in a statement.

Under the pact with Washington, India will lift a veto on a global agreement on streamlining customs rules that is likely to add $1 trillion to the world economy as well as 21 million jobs, 18 million of them in developing countries.

Modi, elected in May, had pulled the plug on the World Trade Organization (WTO) agreement four months ago because he objected to a related deal on food security.

Washington, which was the principal opponent of India's food scheme on the grounds that it distorted trade, hailed Thursday's deal. Trade Representative Michael Froman said it would "give new momentum to multilateral efforts at the WTO" and predicted the Trade Facilitation Agreement (TFA) struck by the WTO last year in Bali, Indonesia, would now win quick ratification.

It has been agreed between the two countries that the 'peace clause', crucial for uninterrupted implementation of India's food security programme, will continue indefinitely till a permanent solution is found by the WTO.

As per the Bali agreement, the peace clause, which gives legal security to member countries and protects them from being challenged under other WTO agreements, was to continue till 2017.

"India and the US have successfully resolved their differences relating to the issue of public stockholding for food security purposes in the WTO in a manner that addresses our concerns.

"This will end the impasse at the WTO and also open the way for implementation of the Trade Facilitation Agreement (TFA)," Commerce and Industry Minister Nirmala Sitharaman told reporters here.

Attributing the successful bilateral talks to Prime Minister Narendra Modi's visit to the US in September, she said "After the Prime Minister's visit to US, there was a greater understanding of India's position."

In Washington, the US Trade Representative Michael Froman said that the Bali package, which was held up in July after India raised concerns over the food security issue, will now move forward.

"We have overcome that delay and now have agreement with India to move forward with full implementation (of the Bali package)," he said.

Following the agreement between the two important players of the WTO, its highest decision making body -- General Council -- will review the proposal of the two countries in the second week of December.

Sitharaman expressed hope that the Council would clear the way for India to sign a protocol for implementation of the trade accord. .

India Has To Ensure Poor Get Enough To Eat
In talks to break the deadlock, India stressed the importance of ensuring that its 1.25 billion people, many of them poor, have enough to eat. It won an open-ended commitment from Washington to protect its food purchase and distribution scheme from any challenge under WTO disputes procedures.

Without the clause, India could have been vulnerable to attack by trade partners over exports of any surplus grain stocks accumulated in government warehouses.

New Delhi's blockade had plunged the WTO into its worst crisis in two decades, leading Director General Roberto Azevedo to float the idea of abandoning the consensus principle on which the 160-member group operates.

Modi's tough line jarred with the 'Make in India' pitch he has taken to investors abroad in his first five months in charge. He could have been isolated at his first G20 summit of world leaders in Brisbane, Australia, this weekend.

But India, home to a sixth of the world's population, is one of the few bright spots in a flagging global economy and Modi was vindicated in his conviction that its promising market for cars, mobile phones and medicines would not be cut adrift.

"This is a huge plus for the world trading system - it uncorks TFA and potentially other deals," said Frederic Neumann, co-head of Asian Economics Research at HSBC in Singapore.

"From Modi's perspective, it's a major victory to say we've got an indefinite stay of execution on our food subsidy scheme."

Indians Quietly Confident
Modi instructed aides early last week to strike a deal. Throughout the impasse, Indian officials expressed quiet confidence that Azevedo would not win enough backing to follow through on his threat.

India had called for a permanent 'peace clause' to protect its food stockpiling scheme, subject to certain conditions, until a permanent solution on the issue was found at the WTO. Under the Bali accord, the peace clause would have expired after four years.

India refused to bow to calls to scale back its scheme to buy wheat and rice from its farmers, despite criticism that this encouraged overproduction. A food security law passed by the last government actually expanded the number who were entitled to receive cheap food grains to 850 million.

In a recent disclosure to the WTO, India said its state food procurement cost $13.8 billion in 2010-11, part of the total of $56.1 billion it spends on farm support. Wheat stocks, at 30 million tonnes, are more than double official target levels.